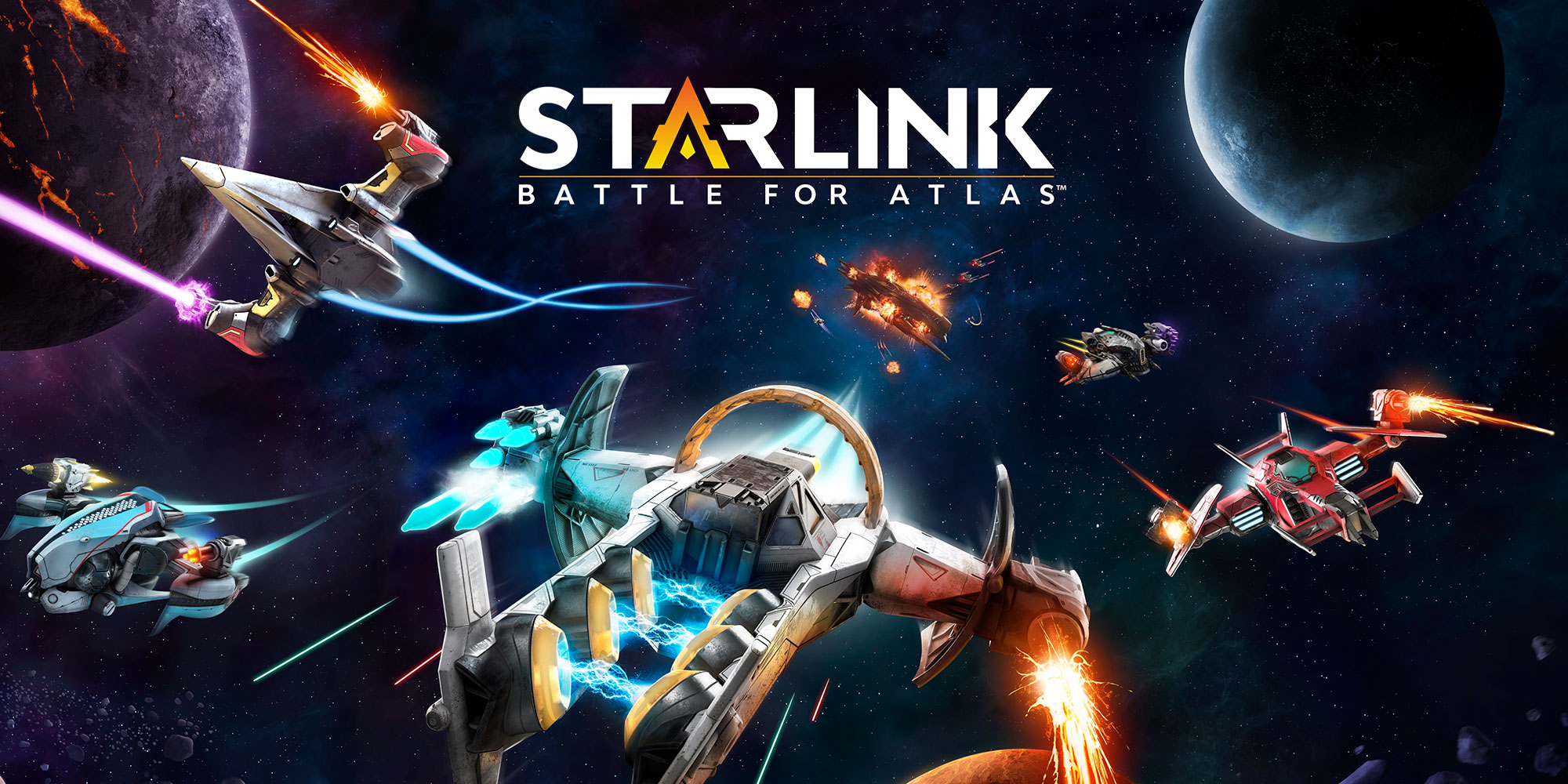 Starlink Battle for Atlas is a kind of spin-off to the popular Star Fox series, with the only difference that the game does not focus on the key fox character and comes out on different platforms, not just Nintendo.

And you obviously heard about this project when Ubisoft held a presentation and showed that before us a game with the figures of spaceships.

They were presented at the stand of the company in the center of E3 – chic models of spacecraft, and quite impressive sizes. 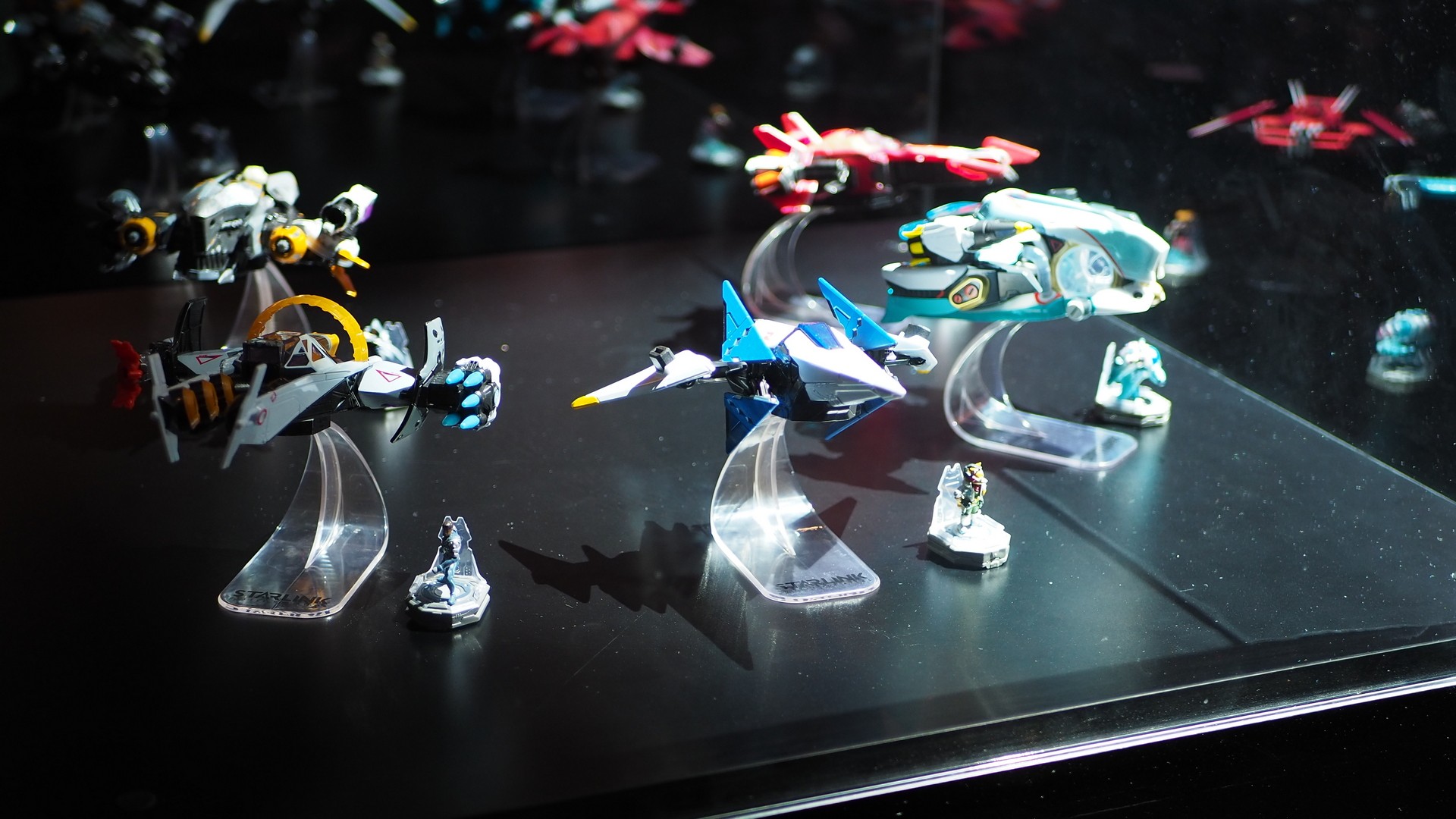 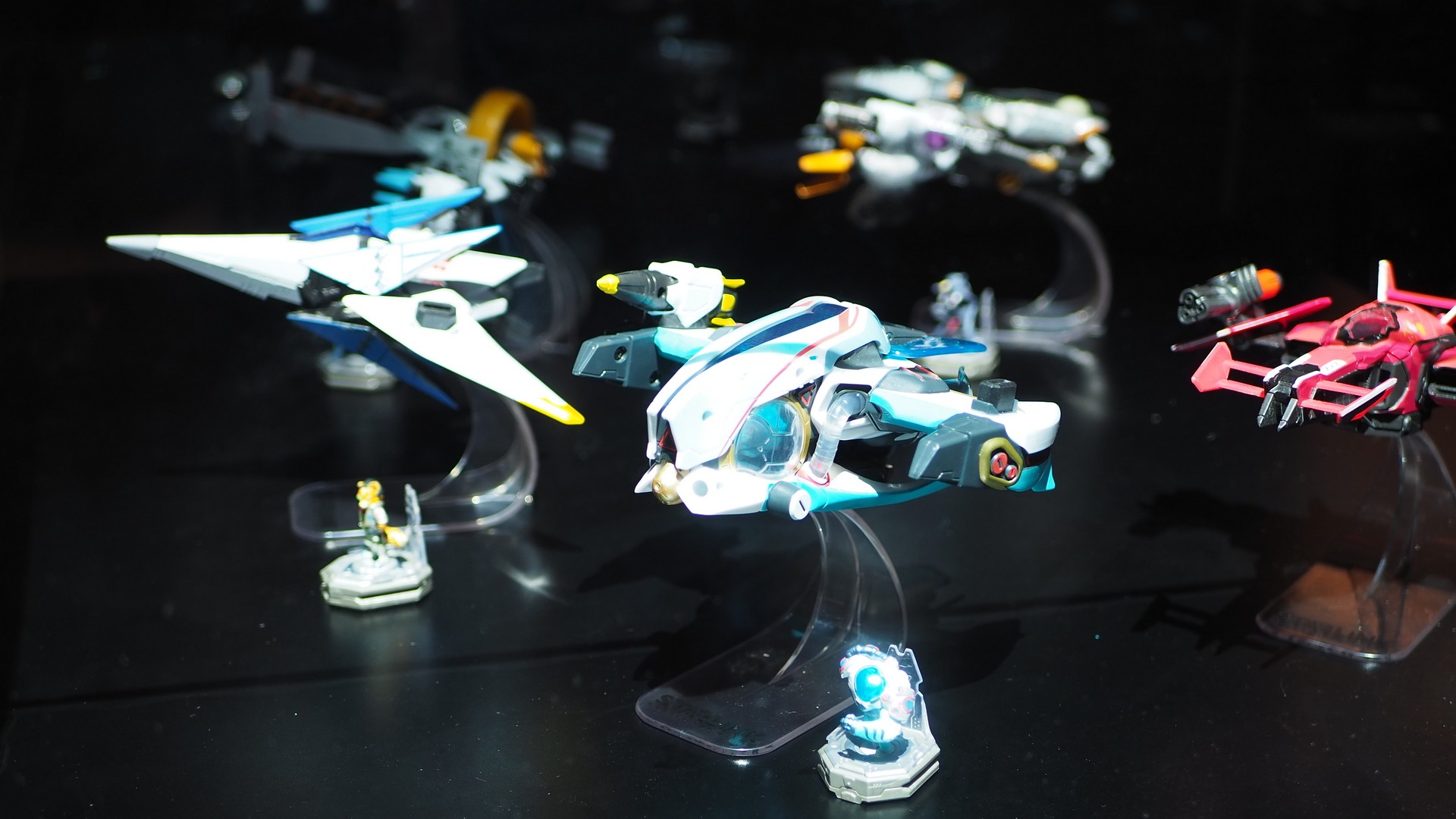 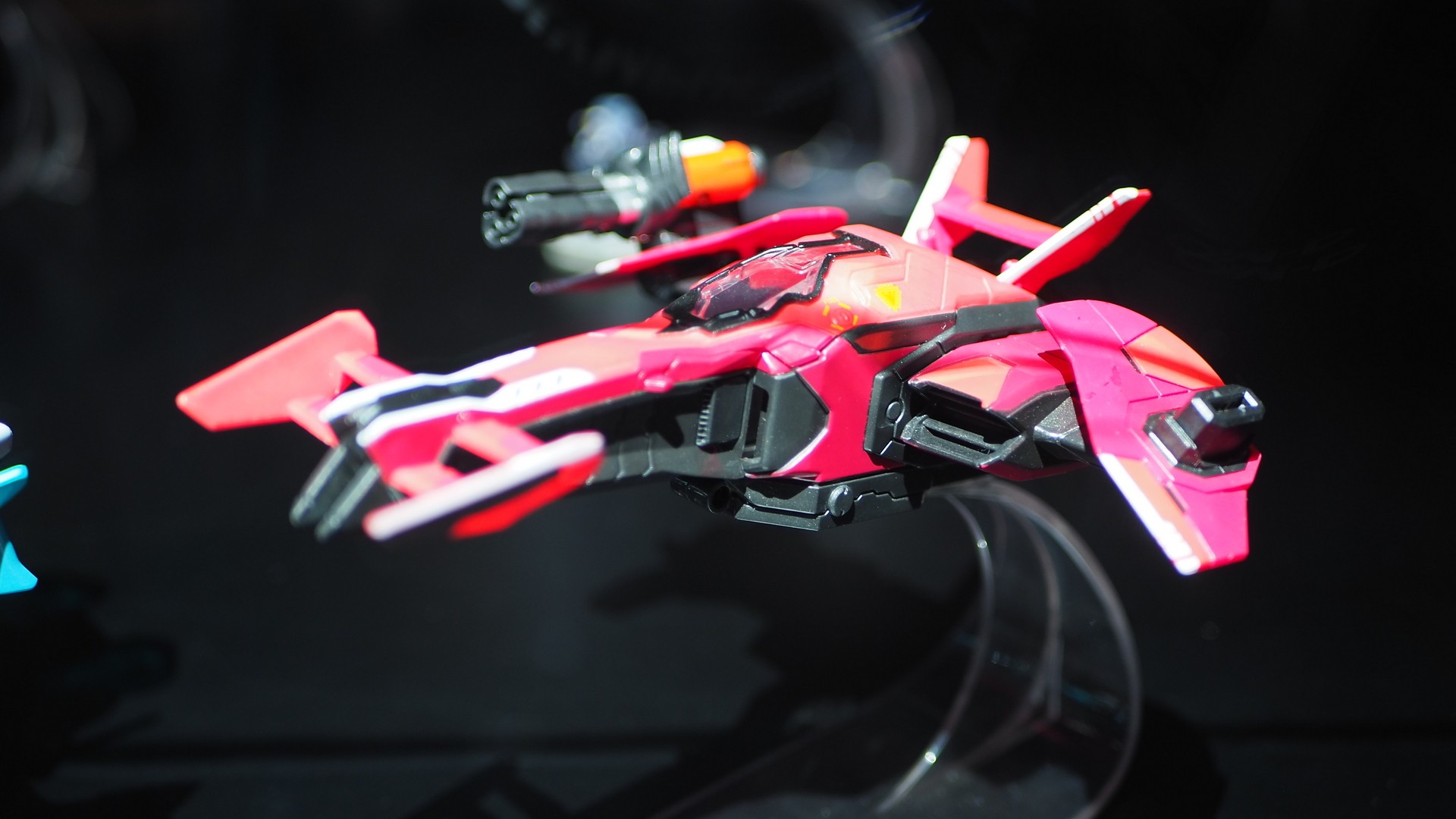 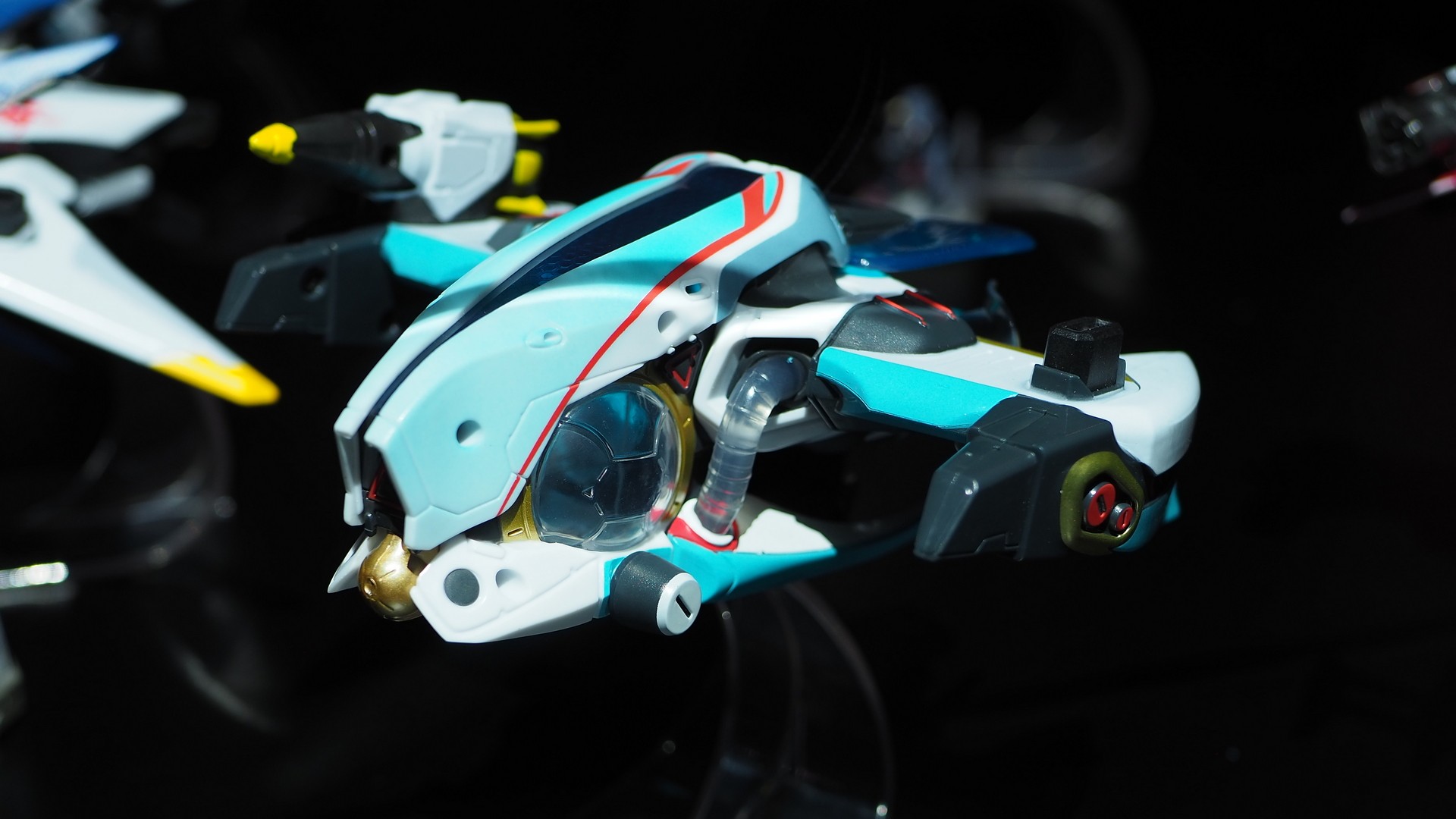 These figures are very important elements of the starlink battle for atlas as such.

Each ship connects to the console.

(I do not know exactly how this will happen in the case of the PS4 or Xbox One, the Switch will most likely function similarly to the Amiibo figures).

And you can change the equipment and the pilot on it.

Which will directly affect the display in the game of your character and its capabilities.

Roughly speaking, if you want to equip a ship with a freezing laser, you will need to place such a laser on the model of the ship and connect it to the console.

But in the Switch version in which I played, all the pilots.

Ships and variations of weapons were already in the project and were simply selected from the menu.

I chose some cosmic teardrop-shaped humanoid, equipped the ship I liked  and went to meet the adventures.

The game process begins in space, that is, you fly between the planets, when one of them flies a signal and the task opens.

Instead of some menus or warp-loads, you fly on a ship to the planet and dive into the atmosphere.

Passing through which you do not lose the ability to control the ship and you see how the landscape is drawn around.

Various creatures and objects appear on the map as they approach to the surface of the planet.

Unlike No Man’s Sky, with which the game is periodically compared.

But at the same time allows them to set their own style and unique appearance.

Rather than hoping that the generator will do it for you.

In the demo-build of starlink battle for atlas, the planet was not very impressive,presenting to us a desolate landscape with rocks.

Grass, rare plants and mountains as key attractions, but nevertheless it looked very nice, even without the WOW effect.

Our ship can fly safely in the air and even leave the atmosphere (no one on the planet closes you).

And sit down on the ground, turning into a kind of tank.

Rather, it simply hovers low-low over the ground, can jump and where it is more convenient to control.

And the speed is less, and you can also stop.

And when you fight with enemies, some are more convenient to beat from such a position.

Others require an attack on the upper part of their bodies (you need to fly).

Others knock you down and put a certain “debuff” that does not let fly away.

They also attack with different patterns, gather in packs, escape and call someone to help.

And also they all have a certain level, that is.

While you are flying on a ship of 3-4 levels to fight even with ordinary enemies of level 7 it becomes difficult.

Since your missiles and weapons cause too little damage, while the enemy kills you for 2-3 impact.

Do not forget about different types of weapons, because the freezing laser does not work well for icy purposes, they need to contrast something hot.

During the mission it was necessary to destroy and capture structures in the game world that looked like spiers with a glowing ball in the center. S

uch nodal points (they look about the same in the boss, but less in size) and ask missiles.

It’s always clear where to shoot.

The victory over the enemies and the destruction of such objects allows them to seize some resources.

And gain experience for further development.

An interesting point is that due to different effects, the battles look really cool.

But even small, bright enemies can fire waves around him and shoot something with a limiting field of view.

And anyway, some fights take place in a zone with limited visibility.

Which prevents you from using the ship for the whole hundred.

But this is the case that you want to take and overcome.

During the fights, various messages that give additional tasks to the player also leak.

For example, during the fight with the final boss of the demo version.

A message came to me on the communicator about the attack either to another planet.

Or to an orbital station, and limited in time.

And you need to either break out and fight in space to make it.

But at the same time letting go of the boss to heal and lick wounds, or complete the mission.

Sacrificing a chance to save the allies .

So the tension does not leave you throughout the game.

In addition to battles, the game offers both collecting items.

And researching different forms of life, and simply studying the planets.

I’m sure that this will not stop there and the most interesting activities will be presented only in the final build.

But those 20 minutes that I took to starlink battle for atlas were too full of bright events and I wanted to continue playing there, staying on another slot.

Unfortunately, the queue of those wishing and the acute shortage of time during the E3 did not give me the opportunity to try anything els.

The Switch image in the docking station mode was quite grainy.

But it did not suffer from a lack of detail.

But the release promised to seriously cut this time.

Fly in the ointment – since physical ships will be difficult to bring and sell in our region.

And even modules need to be somewhere get it.

It turns out that we can only see the game in a limited form on the shelves of stores.

For example, with digital purchases of pilots, ships and equipment.

Which, of course, is not as fun as collecting your own collection of ships.

It turns out that even though I generally had no idea what to expect from Starlink Battle for Atlas.

And did not put any hopes on it, it surprised me at E3 2018 from the whole steep line of different projects.

No doubt, this will be a very curious project that can become a hit of the AAA class.

And gather around itself a huge audience if everything in it is done at the proper level and the developers do not lose all the positive developments that are already there and are demonstrated before the release.

Cross your fingers, so that it was. Well, that the ships could be bought on a free sale, of course, too – I would like to put a couple of them on my shelf. 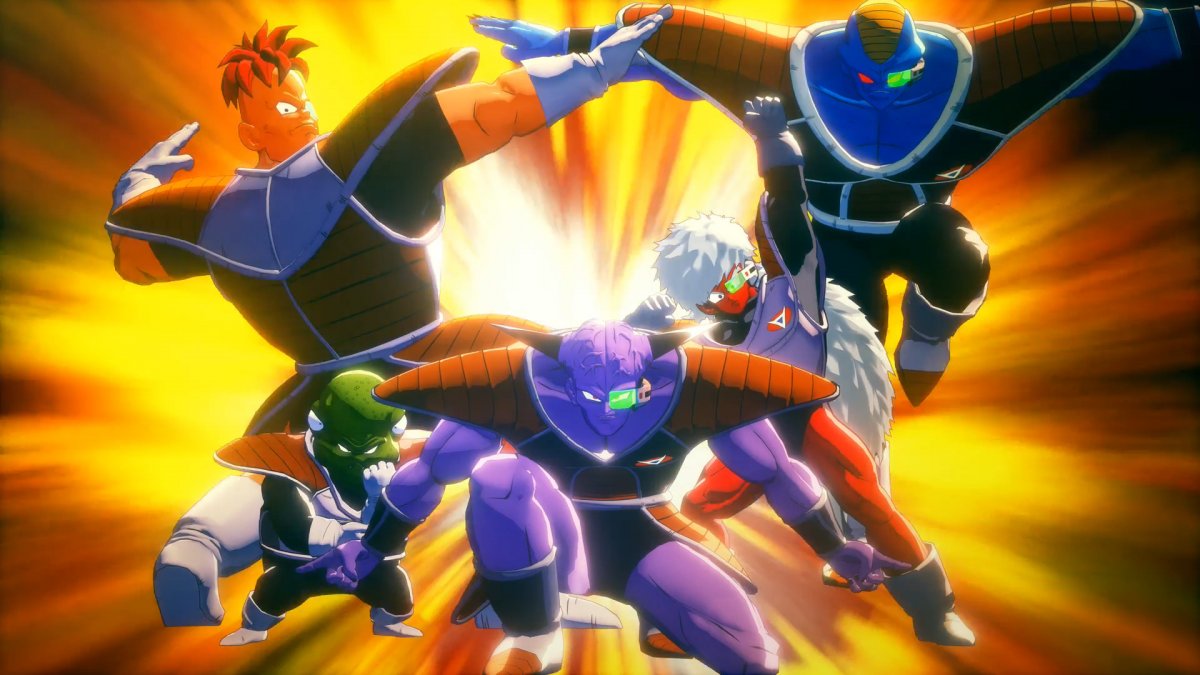 Warner bros explained why Megan Fox will not play Kitana in the new adaptation of “Mortal Kombat”
Back in 2016, the actress Megan Fox expressed a desire
02

Dungeons, a linear beginning and more – an insider shared new details of The Legend of Zelda: Breath of the Wild 2
Tyler McVicker, author of the popular YouTube channel
02

Review of the film “Guns Akimbo”: welcome to the action category “B”
No matter how much Daniel Radcliffe didn’t try to get
01
This website uses cookies to improve your experience. We'll assume you're ok with this, but you can opt-out if you wish.Accept Read More
Privacy & Cookies Policy
Necessary Always Enabled