No clever combo – a jump button, one attack button. As arms protrudes rapier: it is possible to strike three different directions and to block the attack, if its position coincides with the adversary.

This simple combat system deepens still a couple of tricks like throwing a short sword in the face of the enemy or the enemy disarmament (and you). Defeating the enemy, you need to have time to run through a few screens to forward its spawn – where the winner eats snakes giant pink (connoisseurs will appreciate the Scandinavian mythology).

Despite the seeming simplicity of the game insanely addictive and possible scenarios in the duel could be set. Fall into the chasm because attempts to evade the flying blade; Lose the weapon, but cleverly knock down your opponent down and wring his neck;Nidhogg .

Not 24/7, of course, but at gatherings with friends – it. Judge for yourself, the perfect game for two: an insignificant barrier to entry and absolutely equal status of the parties – because of this all depends on the reaction of the players and the ability to predict the actions of the opponent. Nidhogg 2 came out three years later – if she lost these qualities?

Even finding themselves without weapons, with due skill, you can come out a winner

The first thing that catches your eye – a new visual approach. Even before the release of the game is angered many fans of the first part, acid minimalist style which looked surprisingly natural.

Nidhogg 2 is at first seems too overloaded with unnecessary details and looks scary (especially the screenshots). But eventually you get used to a new style almost instantly – the animation is very good, and the erstwhile speaker has not disappeared anywhere.

The major gameplay innovation – advanced arsenal is not deprived in this case the balance of the game. Combat knife, for example, a small radius compensates increased rate of attack. Two-handed sword, by contrast, has the largest radius of destruction and lower mobility, but also allows you to knock out of the hands of the enemy any other weapon. Onions also allows remote battles, but for every shot has to advance nock.

Among the battlefields – airship, sunny beach and even a huge worm intestine

Weapons issued randomly after each spawn that is beneficial to the variety of game situations. It may seem that this can ruin the balance, but do not worry – before the start of the match, it is possible to ban any kind of weapons and even leave their characters to fight only with their fists.

If this will seem a little, you can choose from a number of influencing the gameplay mods like reduced gravity, the effect of a boomerang (thrown into the enemy’s weapon always comes back, trying to demolish the head off the hapless swordsman) or curved arms (gun falls out of the hands after each stroke, making proceed with even greater caution).

And increased choice of locations, some of which offer a unique environment, whether it is overgrown with grass, where no one can see what a blow prepares opponent or ice islands, swaying under the weight of the players. Other useful things easier to navigate – a new interface allows, for example, to find out exactly how much you need to run to the finish.

In addition to the classic Versus brought tournament mode for 4-8 players and single mode, rather serves to get acquainted with the basics of boevki and new weapons. But all is not so important compared with the principal, which makes Nidhogg 2 – does not try to change that, and so works.

The privilege of being eaten may seem ambiguous stimulus, but the game does not raise this question

Overall Nidhogg 2 The following recipe worthy sequel: save all the good than remember the first part, and do even better. Nothing revolutionary new it does not offer, but the fact that is taken for, cope very well. So gather friends, uncovers blades and gamepads, and many hours of fun for a painted bloodshed guaranteed.

In 2017, the good old game for two players virtually disappeared from the market. It is a pity, because no single player will not bring as many emotions as a fierce fight with a friend on the same screen! Do you often play in the company? 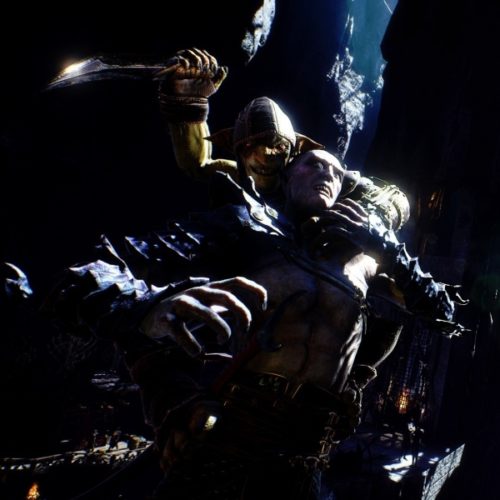