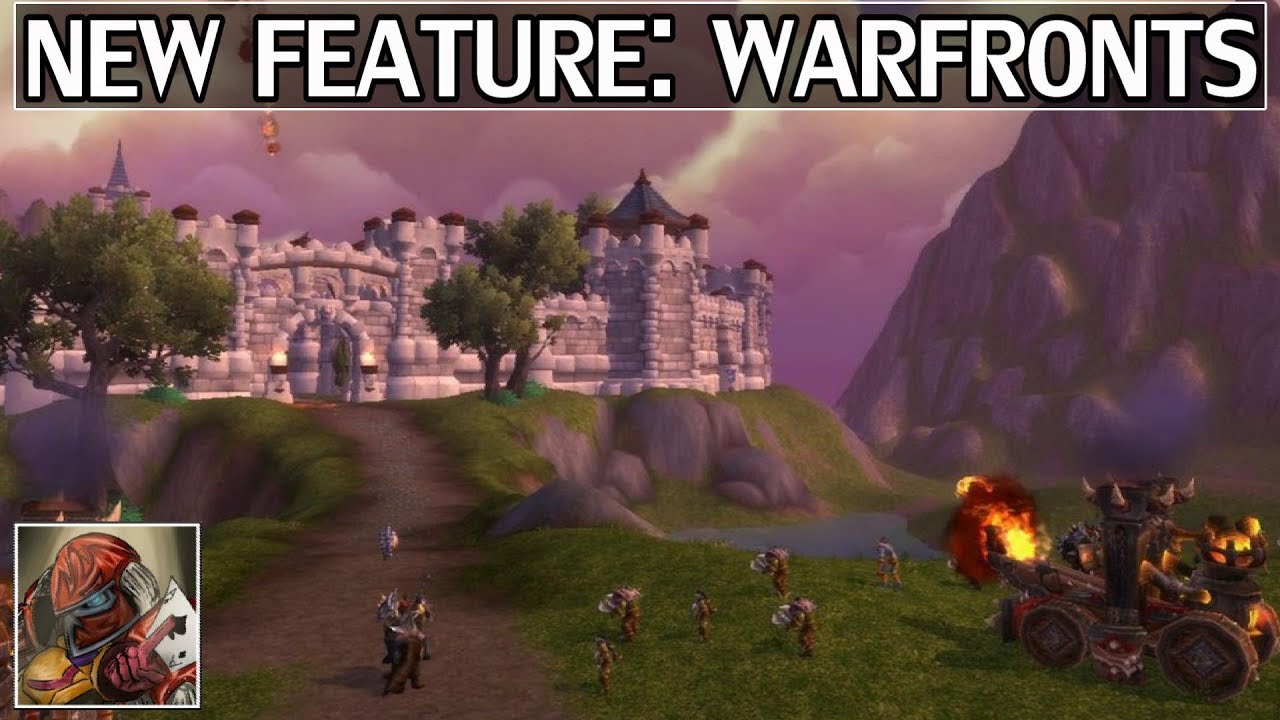 If you run warfront wow, then players in the new regime will serve as both workers and ground forces at the same time, and the main striking force will be directed by the game system immediately for both factions.

The basic principle of the new unique regime is relatively easy to master.

At the moment,warfront wow is so far only a kind of PvE activity.

So if you were expecting large-scale PvP battles between factions, you most likely will need to wait.

Warfront wow will initially be available to players only the highest level and before its immediate launch you will initially need to wait for its stage of preparation.

The fact is that the main idea of ​​the new update is in the war of factions, therefore both will fight for the new controlled zone of Arathi Highlands.

But both factions can not participate in it simultaneously.

Initially, each of the parties will need to prepare and make a certain contribution to the deployment of troops, this can be done by filling a special scale.

In this process, all players of a particular party participate on the server.

Roughly speaking, in a certain place on the new islands there will be several NPCs and they will be able to take special quests for training, they will require the following from you:

As a reward, the overall training scale will be filled by a certain percentage.

And the player himself can get the basic energy of developing a new artifact or one of the new reputation currencies.

Tracking progress can be done by hovering the mouse over the new icon.

Which will appear if you open the global map.

Most likely the very first activation will occur in the faction.

In which players will get to level 120 faster.

Further, as I understood, after one of the parties dials 100%, the Warfront wow system will become active and it will be possible to directly transfer to a new location.

However, access will last only a few days (2 days on the beta), while the other faction will not get 100% either.

That’s how the new location will constantly have a change of ownership.

And the process of filling the scale is likely to be long and take several days. 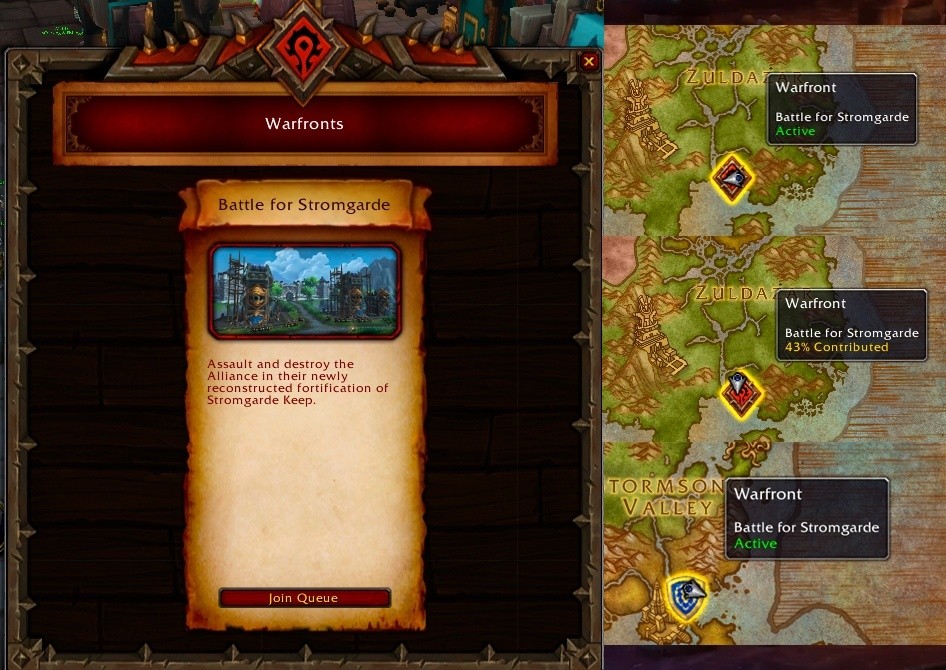 The Warfront wow mode is an activity for 20 people, where together you will fight against the NPC.

The ultimate goal is to kill the general of the opposing faction.

Initially, all players will appear over the destroyed fort of their faction, where they will be dropped.

You will need to kill the elite commander and his small army to seize control of the fort.

Only after that you can begin to rebuild the ruined town hall, after which different variations of buildings will be available for construction.

It is best at the beginning to go to the barracks, which can produce troops.

Approaching, you will see the construction interface.

Here, the joint efforts of the players need to bring two main resources: iron and wood.

And for this, as in the classical strategy, you need to find (grab) special places with resources.

The speed and magnitude of resource extraction is affected by the level of your town hall, with its rise everything will become much easier.

And players with the profession of mining can extract ore independently, while at the usual gathering they will receive much more ore.

Also on the base will be available various tasks for which you can get consumable items.

Among all the awards, perhaps the most useful is the scroll of teleport to the city, made in the old style of Warcraft III. 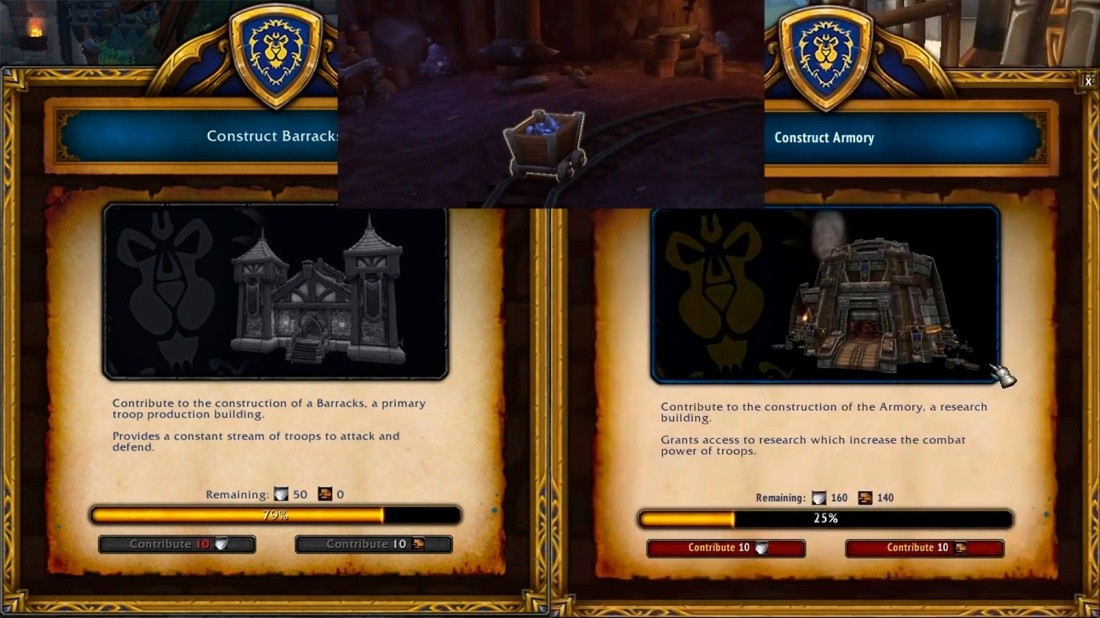 After the completion of the construction, you only need to hire various troops and continue building other buildings.

These same troops you can buy as your own bodyguards.

Depending on the level of your town hall.

And after losing it you will have to repeat the process.

Also, you can build a special structure where you can improve the attack and armor of all your troops.

By the way, the damage of some of them is also based on your main building.

There is also a special building in which you can buy various buffs for your hero for the resources.

But whether they will be of use, it is up to you personally to decide.

The most important and valuable building is a workshop for the production of special siege machines.

Only you can get them to break the main gate of the enemy base and destroy the defensive structures.

In general, the system is very similar to the usual classical strategy.

Note that it is best to immediately aim at important objects (for example, to facilities for unlocking troops).

To do this, you will first need to kill all the enemies and then start a long process of capture by clicking on the flag.

It is important that all other players at this very moment guard the player, casting the capture.

Because any damage will stop the cast and you will need to repeat the entire process first.

On the other hand, NPCs capture buildings much more easily.

It’s enough for enemy forces to just go there in big crowds and stand for a couple of seconds.

Forcing you to do the process with the flag again.

Also, running on the map you can safely meet various neutral buildings and just different mobs.

From which the main resources needed to build your base can fall.

In addition, there is also a huge and very “thick” combat tank of the opposite faction on the map.

It is a pretty strong threat in the attack, but for its destruction you can get a valuable loot.

Judging by the various bases, a different violet gear of 350+ level can fall from it.

For the alliance players such a tank is Doom’s Howl.

And representatives of the horde will need to look for the golden tank The Lion’s Roar. 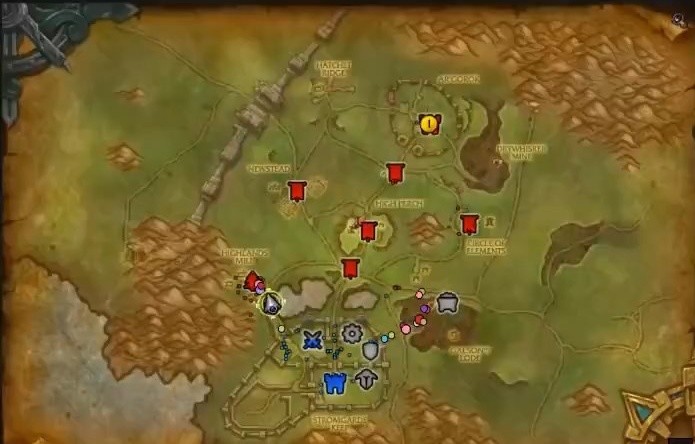 The match will end after you successfully be able to escort and protect your siege machines to the gates to eventually get inside and kill the general of the opposing faction.

By the way, I forgot to mention that every general has his unique ability.

Which he can use only at the maximum level of development of the town hall.

In addition, a unique set of transmogrification.

Made in a traditional style for a certain faction.

Will also be available, with several color shades of the same armor.

To summarize, Blizzard has a rather interesting mode, which combines various elements of RTS strategies. But only so far it can seem so only to fans of PvE.

After the launch it will be necessary to follow the news and see if Blizzard intends to add PvP mode. Even I, not a special fan of PvP, want to try, as it will be in practice.