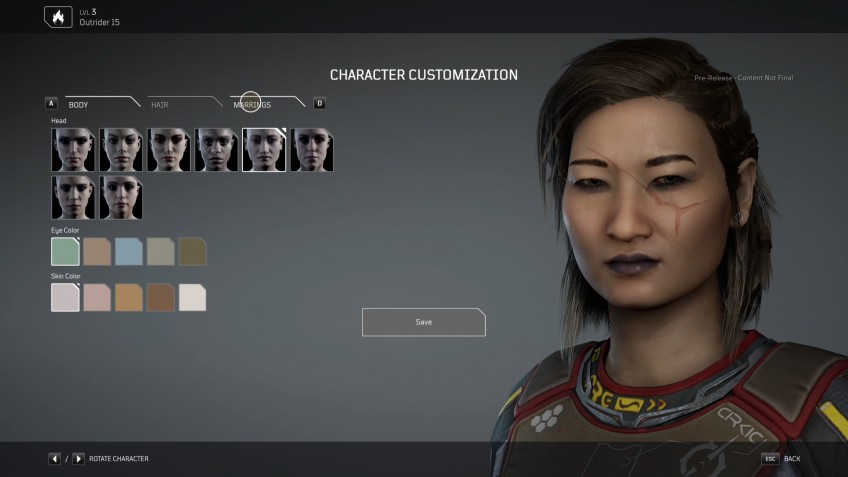 What was the unusual hybrid Destiny, Borderlands and Gears of War?

In the rubric “In plain text” authors express their own opinion only, which may not coincide with the opinion of the editorial board (or may coincide). They are free to do it as they please and in any format convenient for themselves. Everything is possible here.

In late January, we visited the studio People can fly. This is a legendary team that has been playing shooters for 20 years. Its composition changed greatly, but at one time it included people who gave us Bulletstorm, Painkiller and Gears of war: judgment. And so she finally comes back with Outriders – a new game in the original setting. We played in the first three hours of the demo – and now we will tell you all the details.

For People Can Fly, this game is a kind of strength test. For too long, developers have been involved in the Gears of War franchise under Epic Games. Now the team agreed to work with Square Enix – and decided to make a completely new, independent title.

What are Outriders? This is a cooperative shooter with RPG elements that can be played by up to three people. I’ll immediately upset: it will not work against other players, only against bots. You create a character at the beginning of the game, choose one of four classes, and go.

According to the plot, humanity had to leave their native Earth: it was destroyed by war and climate change. And our protagonist as part of the expedition just explored new planets suitable for life. But on one of them, the characters fell into a mysterious anomaly: she split some into molecules, and gave others special powers. Alas, the main character was not lucky: the injuries were so terrible that he was put in a cryogenic chamber – so he at least did not die on the spot.

He wakes up only after 30 years – and suddenly he finds himself in the very center of the war for technology and resources. The planet, which was supposed to be a salvation for mankind, plunged into chaos. The anomaly damaged the technique of the colonizers and provoked mutations in the local flora and fauna. And new abilities have turned some people into crazy adherents of mysterious energy. Our hero will have to deal with all this personally – because he, too, is infected with an anomaly. 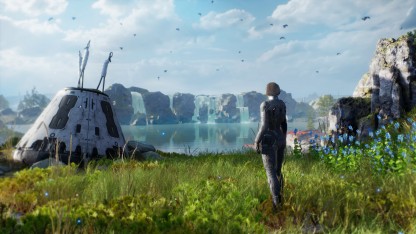 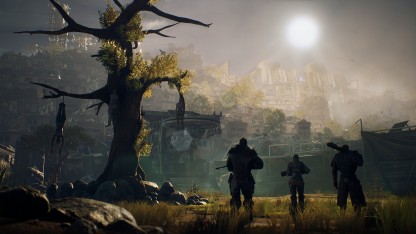 Three of the four classes were available in the demo. Trickster is a bit of an assassin. He has a teleport behind the enemy’s back, time dilation tricks and increased damage. Pyromancer – arsonist, works at medium distances. In his arsenal there is a wave of fire, stopping the ashes of enemies and point burnings. Tank will be the Devastator. It flies into the heart of the battle, knocks back enemies and absorbs damage thanks to stone armor.

At the same time you can take only three skills with you – they open when you reach the desired levels. We were shown four skills from each class, and so far there is an impression that Trickster is too strong. The dome slowing down time is useful in any situation: enemies cease to cause damage, you can recharge, run to cover. And if you assemble a team of three of these, you can just take turns to turn opponents and easily win the shootout. However, the developers insist that the game is much more variety.

People Can Fly: As soon as you have a wide selection of skills, you begin to combine them. If you like to shoot from afar – you can develop your character in this direction. Just pump over the desired branch, which improves shooting. And if you are one of those guys who don’t like to hide in shelters, you can be at the epicenter of the battle so that everyone will shoot at you and say “just look at this big guy”. Inside one class, you can pump both.

According to the creators of the game, archetypes like “tank” or “far” can come from any class. You only need to correctly build and distribute skill points. But skills are not the only thing useful in battle. Equipping a hero is equally important. There are two ways to get it: either search boxes and corpses of enemies, or buy from merchants for farmed resources. And something can be obtained for side quests. In addition, modifiers are added to weapons and armor that enhance skills or negative effects like burning. 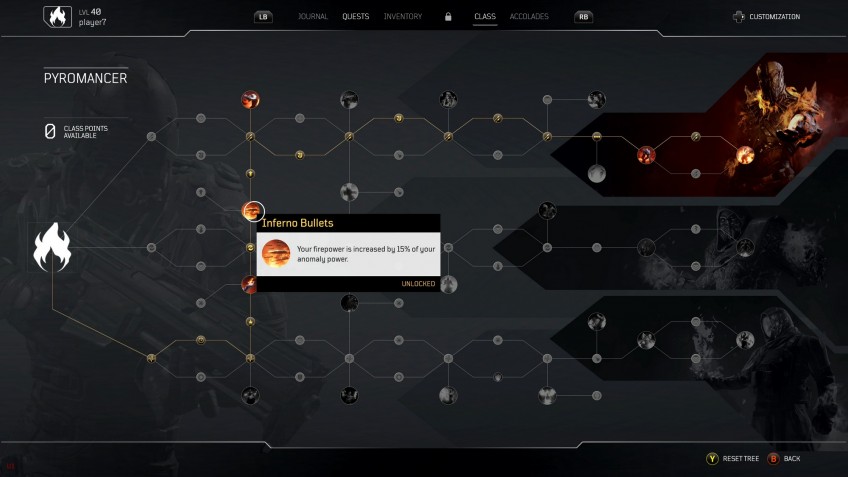 In whom and why we shoot

The shootings at Outriders are dynamic and bloody. And the shelter system, as in Gears of War, adds dynamics to battles. If you want – tank, you want – sit out, catch your breath. There are many opponents, and they are all different, but little remembered. Each battle is just killing a bunch of mobs of approximately the same difficulty. Only a couple of bosses were remembered: one electric dude and one fiery one – they had to tinker a bit with them. But in general, the level of enemies adapts to the level of the player, and the game does not yet pose a special challenge – which is a pity. 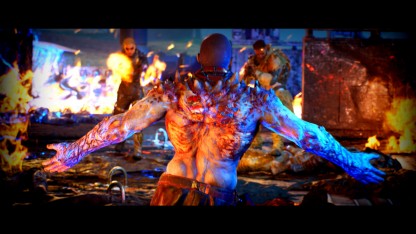 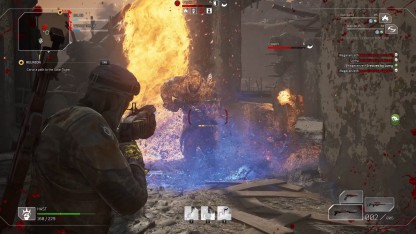 The developers, by the way, do not even consider these guys to be bosses

The developers promise that the plot in the game will not be just “for show”, and this seems to be true. The story of Outsiders is presented through cutscenes and dialogues, and a lot of them met during the session. For fans to dig deeper into locations scattered notes with additional information about the world. And to study it is really interesting: during the time that we were in the refrigerator, much has changed dramatically.

NPCs also change throughout the story, and it’s interesting to watch. One of our acquaintances turned from a sensible scientist into a vessel for anomaly. Another woman, once sociable and cheerful, is now a harsh and cold warlord.

People Can Fly: When we create a new world, we strive to make it as believable as possible. Therefore, everything, even the smallest details should be well thought out. Colonization of other planets, for example, is a pretty real thing. We even hired a specialist who gave advice on this topic. For example, we wanted the colonizers to go down in capsules, and he answered: “Capsules will not fit. It would be much more logical to land the entire ship. ” We believe history is very important. I know that there are many games that history doesn’t need. But our game definitely needs it.

The plot worked on paper is great. But the city that was shown in the demo seemed empty to us: one merchant, one side quest and a couple of outgoing NPCs. And on external locations it all comes down to shootouts and collecting loot with resources. By the way, everyone has their own production in the coop, and they won’t succeed in passing the gun to a friend – this also upset us a little. But we still didn’t play the final version: it is possible that the locations of People Can Fly will be finished with the locations, the cooperative, and everything else. 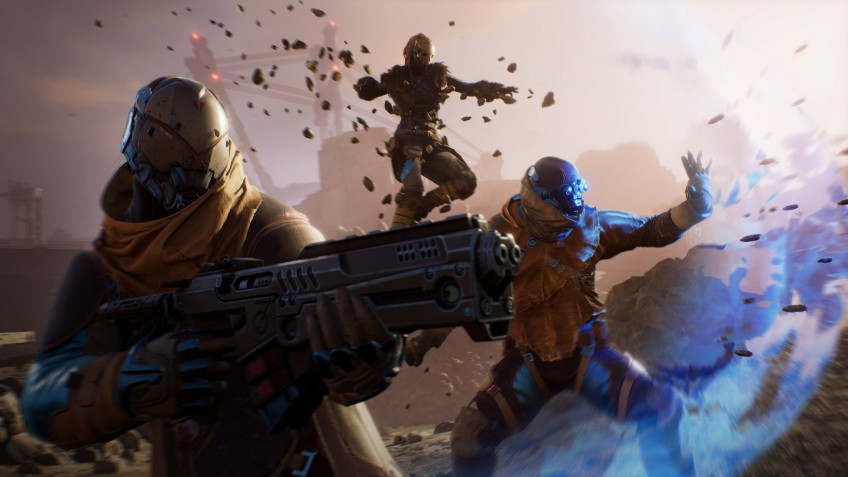 Outriders generally play like a hybrid Destiny, Borderlands and Gears of war. But not to say that the gameplay is particularly impressive: there is not much new in it. At least at the initial levels. The shootings are too simple and of the same type – and this is the central mechanics of the game! It is hoped that the battles will become more interesting in the later stages of the passage, when the hero is already pumped, and you learned how to work with the build. In the meantime, the Outriders’ greatest strengths are a flexible character development system and plot. The main thing is that they do not remain the only advantages of the game – but this will become clearer closer to the release. We have already handed over our feedback to the developers personally, so we are waiting for the game this year. You can play on PC, PlayStation 4-5, Xbox One and Xbox Series X.
Buy Sell game Items creators cs go free skins free mmorpg top free pubg skins game game reviews Games for Kids Gears Grand Theft Auto V free money mmorpg games 2020 Painkiller PUBG guide review role playing games The Witcher® 3: Wild Hunt guide top game streamers video game reviews video games top 2020 war
Rate article
( No ratings yet )
Share to friends
Categories 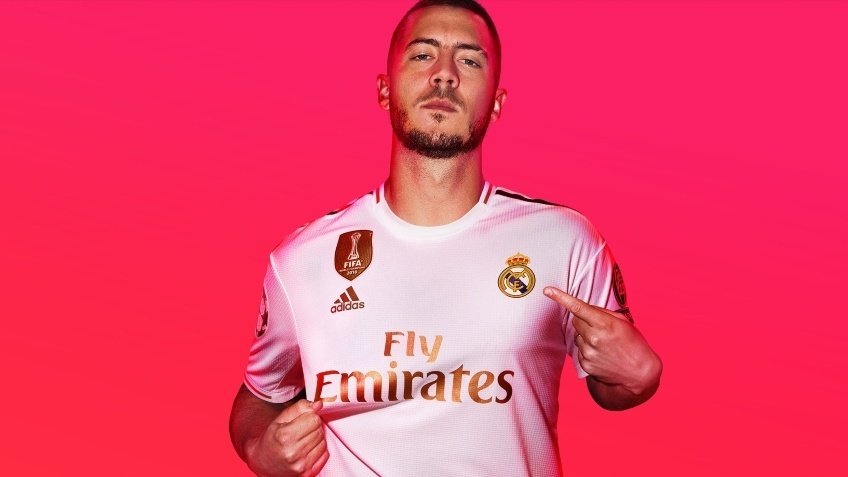 FIFA
FIFA 20 again topped the English retail chart – Gambling
Earlier we toldhow, due to the lack of major releases
0 1
You may also like

Tom Nook, Isabelle, Blazers, Mabel and others – get to know the characters of Animal Crossing
Good afternoon! Today I will talk about some of the
00

“Employees have been given the opportunity to take care of themselves and their loved ones,” Neil Drackmann explained the delay to The Last of Us Part II.
April 2 Sony Interactive Entertainment announced the
01

Xbox Digital Store Launches Big Spring Sale With Up To 70% Off
Microsoft announced the launch of a digital store Xbox
01
This website uses cookies to improve your experience. We'll assume you're ok with this, but you can opt-out if you wish.Accept Read More
Privacy & Cookies Policy
Necessary Always Enabled