New playable archon and arguably the best battery in the game.

Shogun Raiden, also known as Baal, is the main deity of Inazuma. Like other Archons (Venti and Zhong Li), she is primarily a support, but she herself is capable of inflicting significant damage. And the distinctive feature of Baal specifically is the high-speed recovery of energy, coupled with the increased damage of the entire team.

The main value of Baal is concentrated in the ultimate – we download it first of all. Next, we take up the “eshka”: it will give a lot of damage, including passive. But the main attacks can be left untouched, if you do not plan to make Baal the main damage dealer: the characteristics of the main attack are not counted during the action of the ultimate.

Normal attack – up to five quick blows with a spear.

Charged attack – carries out an upward attack, for which a certain amount of stamina is spent.

Attack in the fall – promptly falls to the ground, attacking all enemies on the way. After landing, it deals area damage.

Baal inflicts Electro damage to nearby enemies, after which it gives all surrounding squad members Eye of Thunderous Punishment…

Eye of Thunderous Punishment can carry out only one joint attack per unit for 0.9 sec. Co-operative attacks triggered by characters other than you deal 20% of normal damage.

In this state, Baal uses her sword in combat, and her normal attacks, charged attacks, and fall attacks receive an Electro infusion that cannot be canceled by any other elemental infusion.

When these attacks hit the enemy, Raiden restores energy to all surrounding party members. Energy can be restored in this way only once per second, and this effect can be activated up to 5 times during the duration of the skill.

While in this state, Baal’s interrupt resistance increases, and she gains immunity to the damage from the Charged reaction. When Muso Isshin is active, the damage of a normal attack, a charged attack and an attack in the fall will be considered damage from an ult. Skill effect Muso Isshin disappears when Shogun Baal leaves combat.

The best constellations for Raiden 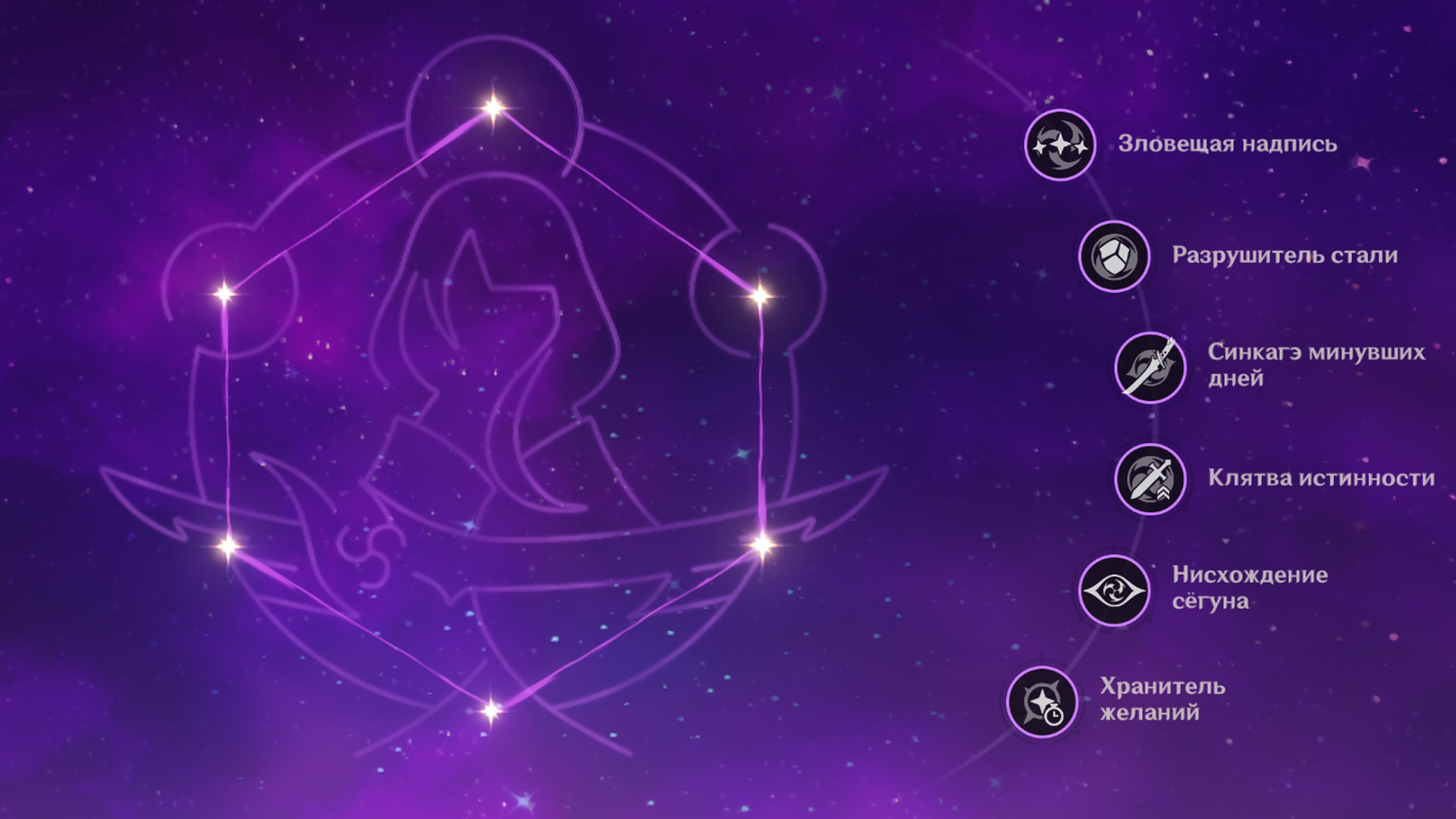 This item is intended for those who are ready to invest money in the game in order to gain constellations from the characters. Let’s say right away that Raiden is a great heroine and no constellations at all. But if you think about which banner to spin in the first place: constellations or weapons, then the answer is unambiguous – constellations. Free 4 * spear Catch (about him below) is great for Baal and is not so much inferior to the 5-star spear designed specifically for her. The Baal constellation is much more useful for increasing its damage and effectiveness.

C1 for Baal will greatly facilitate accumulation Determination to strengthen her ultimate. Unambiguous top in the price-quality ratio. C2 will slightly increase our total damage, plus it will give a nice bonus against enemies – “tanks”. It makes sense to get to C3 too, because this will give +3 levels to the ultimate – namely, from it, we, as already mentioned, get the maximum benefit.

C4 is a simple attack power buff after the end of Baal’s ultimate. But C6 gives an incredible advantage for the whole team. When attacking under the influence of an ult, Baal reduces the cooldown time of the ult of all squad members (except himself) by a maximum of 5 seconds. This is taking into account the fact that she already incredibly quickly regenerates energy for them, acting as a “battery” for the whole team. This means that it will be possible to create an almost endless rotation in which the heroes use their explosions of the elements one after another.

How to Play as Raiden (Abilities Explained) 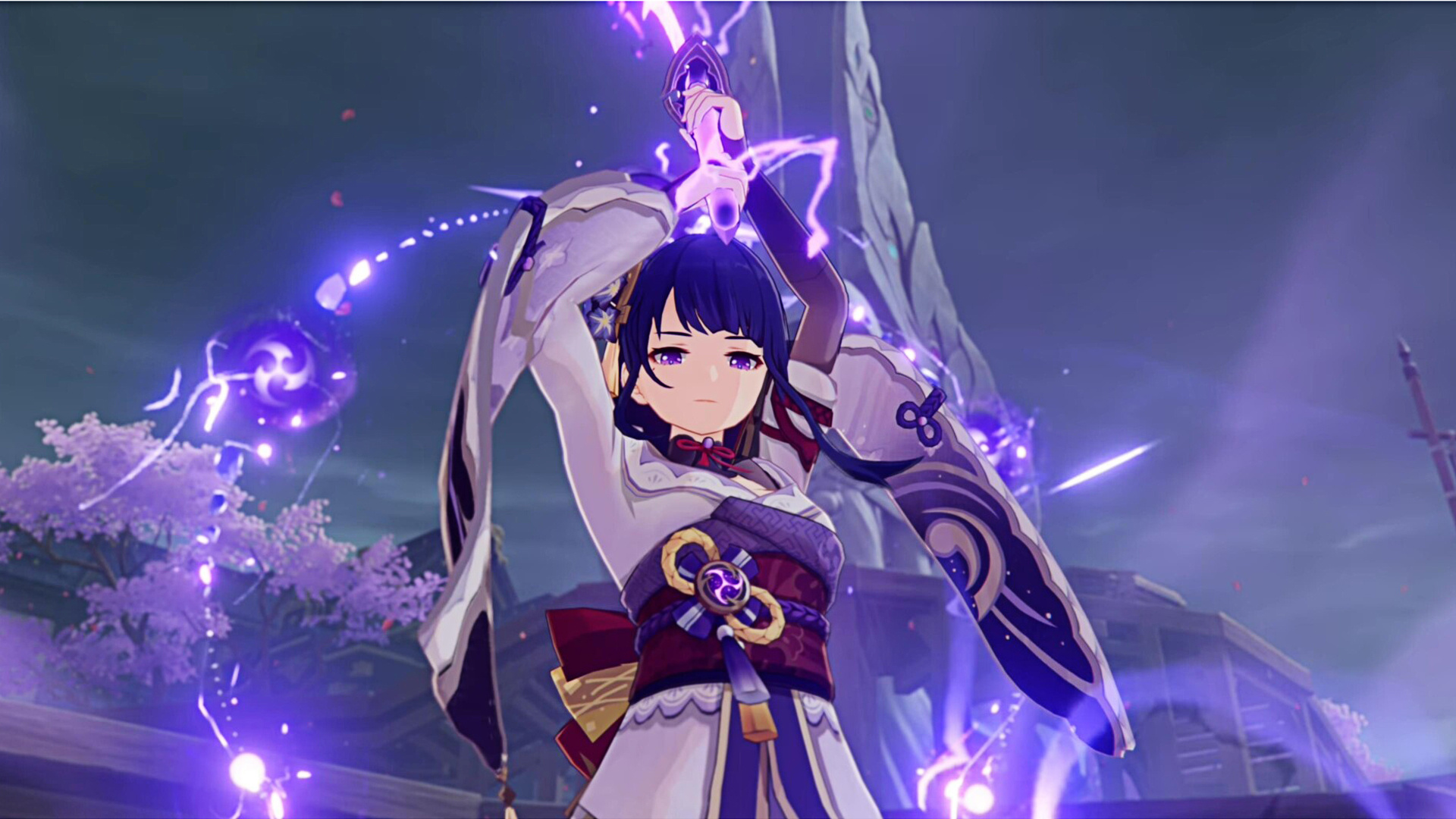 There is a lot of text in the description of Baal’s abilities, and at first it is a little scary, but we will try to explain it more clearly.

“Eshka” is extremely simple: it deals good Electro damage in the area and gives the active character The eye of thunderous punishment which the attacks with the hero once every 0.9 seconds. This mechanic is similar to that of Xing Qiu’s ultimate.

But the “eye” gives another advantage: while it is active, the damage from the active character’s ult increases in proportion to the cost of his ult (it is different for all heroes: 30-90 units of energy, depending on the character). That is why it is advantageous to take characters with an expensive ultimate in a group with Baal: Xing Qiu, Xiang Lin, Eolu, etc. Already at the sixth level of “yeshki” Baal, you will receive + 21.6% to the damage of the hero’s ult, if his or her ultimate costs 80 units of energy. But cheaper elemental explosions will receive a smaller bonus: for example, Zhong Li’s ult (it costs only 40) will receive only + 10.8% damage.

The duration of the “eye” is much longer than the cooldown of the Baal “eshka”, so you will most likely keep it active all the time – just remember to roll the “eshka” every time you switch to Raiden.

Ulta Baal works in two stages. At first, Raiden inflicts one Electro blow in the area (with good artifacts and a pumped ultimate, the damage figure from this blow can easily fly over the 100,000 mark). Then she, armed with a blade instead of a spear, can start attacking with her hand – all this will also be Electro damage. Any damage done during the duration of the ultimate (7 seconds) will be considered damage from the ultimate and will be amplified by Determination. A Determination, in turn, accumulates when you use the ults of all other heroes in the team.

Attacking with a blade, Baal restores energy to all party members. If you change her to another character, she will come out of the stance, and you will lose a lot of damage and energy for the group. That is, by pressing Raiden’s ult, you do not need to instantly switch to the next hero – instead, start attacking the nearest enemy in order to pour maximum energy into your team.

The ideal rotation in a group with Raiden is as follows: turn on the “eshka” Baal, then take turns the ults of the other heroes, then return to Baal, throw her ult and beat the enemies with normal or charged attacks for all 7 seconds of the action of the ult to restore energy to the whole team. At the end of the ulta, we update Baal’s “eshka”, and by this moment the explosions of the elements of the rest of the heroes are already charged and ready. Repeat ad infinitum.

It is better to attack during Raiden’s ult like this: 3 normal + 1 charged attack (or make a dash). Or, alternatively, hit with extremely charged attacks – they do a lot of damage, but quickly drain stamina. The fourth and fifth attacks in the normal series are long enough, so we recommend skipping them. You decide.

The best weapon for Raiden 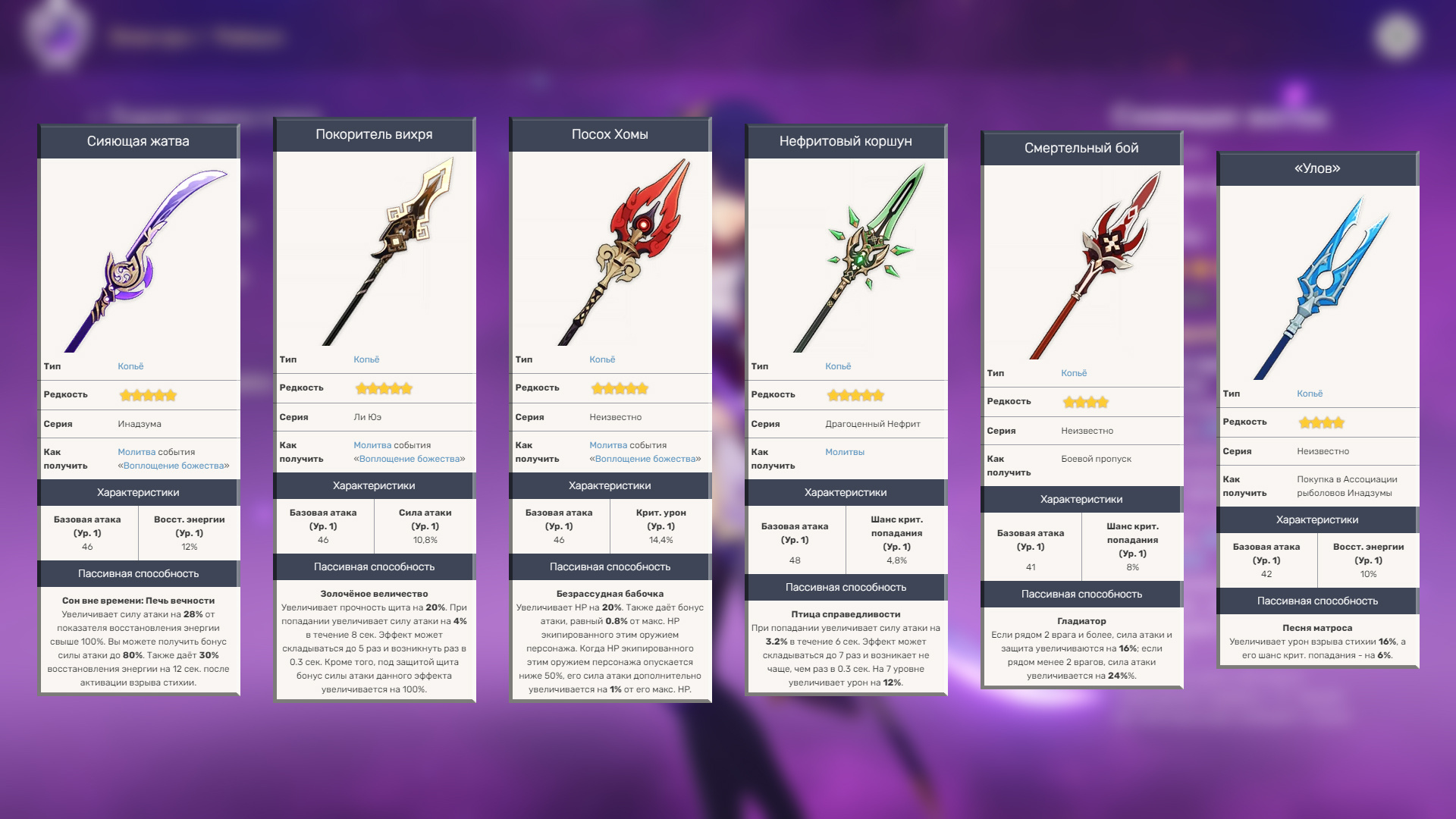 Any five-star spear would be a good option for Raiden, but Shining harvest Is definitely her signature weapon. The huge bonus to energy regeneration along with a high basic attack is perfectly complemented by passive. It will increase the attack power by a percentage of the energy recovery rate above 100%, and for Baal this indicator will be very high: all skills and the top set of artifacts require its maximization. And after the ultimate, the spear will also increase energy recovery by 12 seconds.

Homa’s staff – also excellent stats, but with “Homa” there is a temptation to constantly play from passiveness. It is activated if the hero (in our case Raiden) has less than 50% HP, which is quite risky. Plus, it’s hard to maintain this HP state in groups with passive healing (for example, with Xing Qiu).

If you are the lucky owner Whirlwind Vanquisher, and in the team you have, for example, Zhong Li – be sure to test this spear for Baal. While under the influence of the shield, it has almost the same effectiveness as the Staff of Homa when HP is below 50%, but the risk of dying is much less. The main problem is that there are no crits or energy recovery. You have to get everything from artifacts.

Catch – a new spear and perhaps the best option of all 4-star spears for Baal, especially considering that it is free (spear and awakening materials can be obtained from the Inazuma Fishing Association). Each of its characteristics is aimed at increasing the outgoing damage of Baal. Here and the restoration of energy, and a bonus to damage and critical chance of the ult, and a good basic attack for four stars (510 at level 90).

Mortal combat from the battle pass will give a good increase to the chance of crit and a bonus to damage both on a group of enemies and on single targets. But his basic attack is lower, and in terms of effectiveness for Baal, this spear surpasses Catch only at the maximum level of awakening. And to get to this point, you will have to take out additional copies of Mortal Combat from the Battle Pass for almost six months (and this is not so profitable in comparison with awakening another weapon from there), so the priority is still with the Catch.

Montenegrin peak similar to the previous spear, only gives crit. damage. And the passive is aimed at fighting against groups of small enemies who, when dying, will support you with a buff to increase attack power. Not recommended for solo boss fights.

Spear of Favonia due to its high basic attack (565 at 90th level) and the bonus on energy regeneration, Baal is excellent. And the passive to create particles after crits will be a nice bonus.

The best artifacts for Raiden 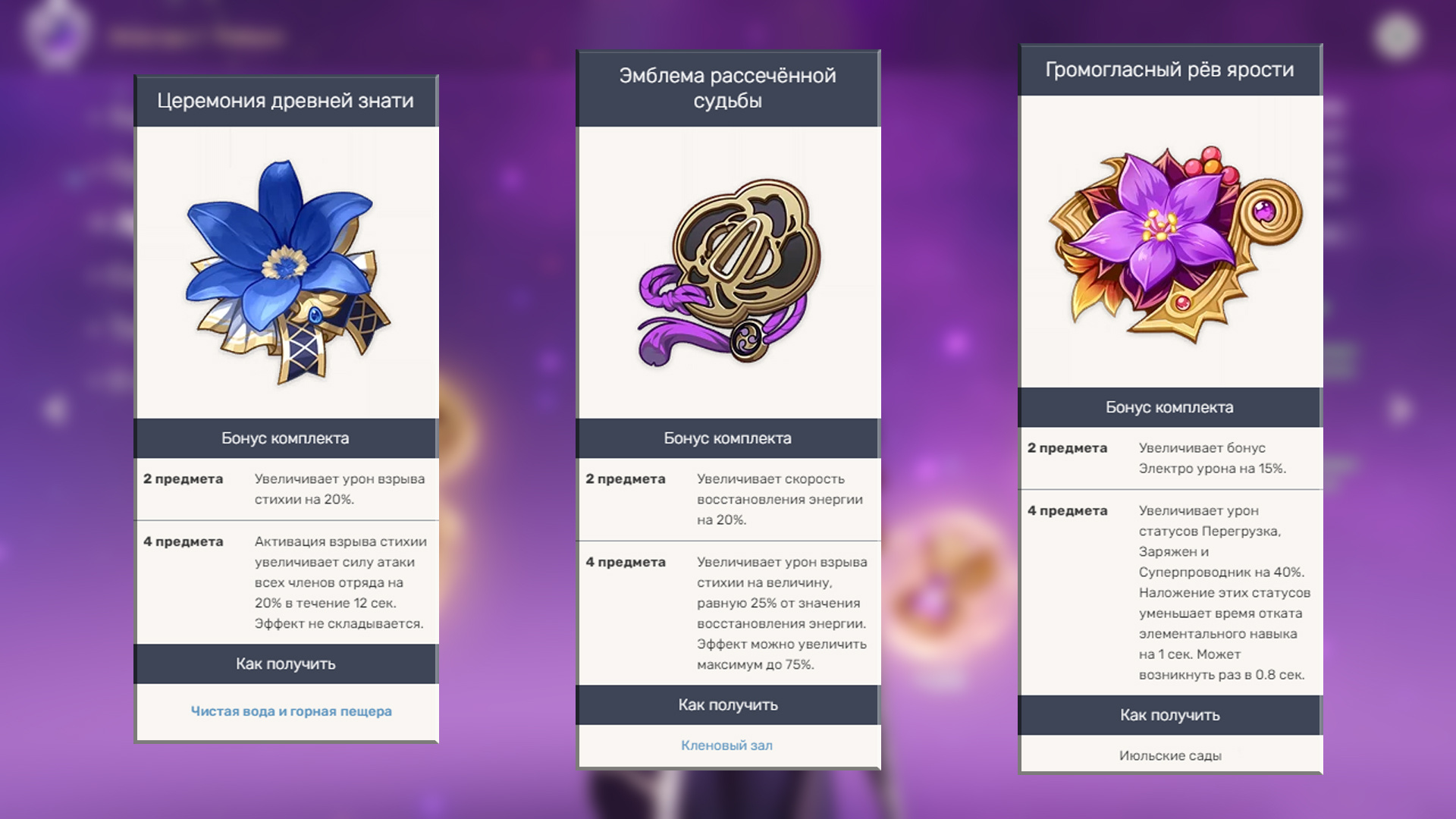 All other sets look much weaker “Emblems”, but still, first of all, focus on the secondary characteristics of individual artifacts. It’s always better to have two half sets with great artifacts than a full set with mediocre stats. Don’t be discouraged if you don’t have four good pieces of a new set – take 2x as a replacement Ceremonies of the ancient nobility or 2x A thunderous roar of rage: it will be a simple and effective solution for the Baal. Be sure to pay attention to secondary stats!

Attention! If you gain too much Electro damage (both 200% energy recovery and a cup for Electro damage), this can reduce damage per second compared to a build where the cup is selected for% attack. Remember that the Electro damage itself, which is multiplied by the above bonuses, is calculated based on the attack rate. And if the attack is not enough, then the effectiveness of bonuses to Electro damage, respectively, will decrease. And one more recommendation: if you are able to gain 200% recovery. energy from weapons, set effect “Emblems” and side stats of artifacts, it is better to take hours for% attack, and not for recovery. energy. And only if you use the clock for% attack, it already makes sense to take the cup for Electro damage.

The best companions for Raiden 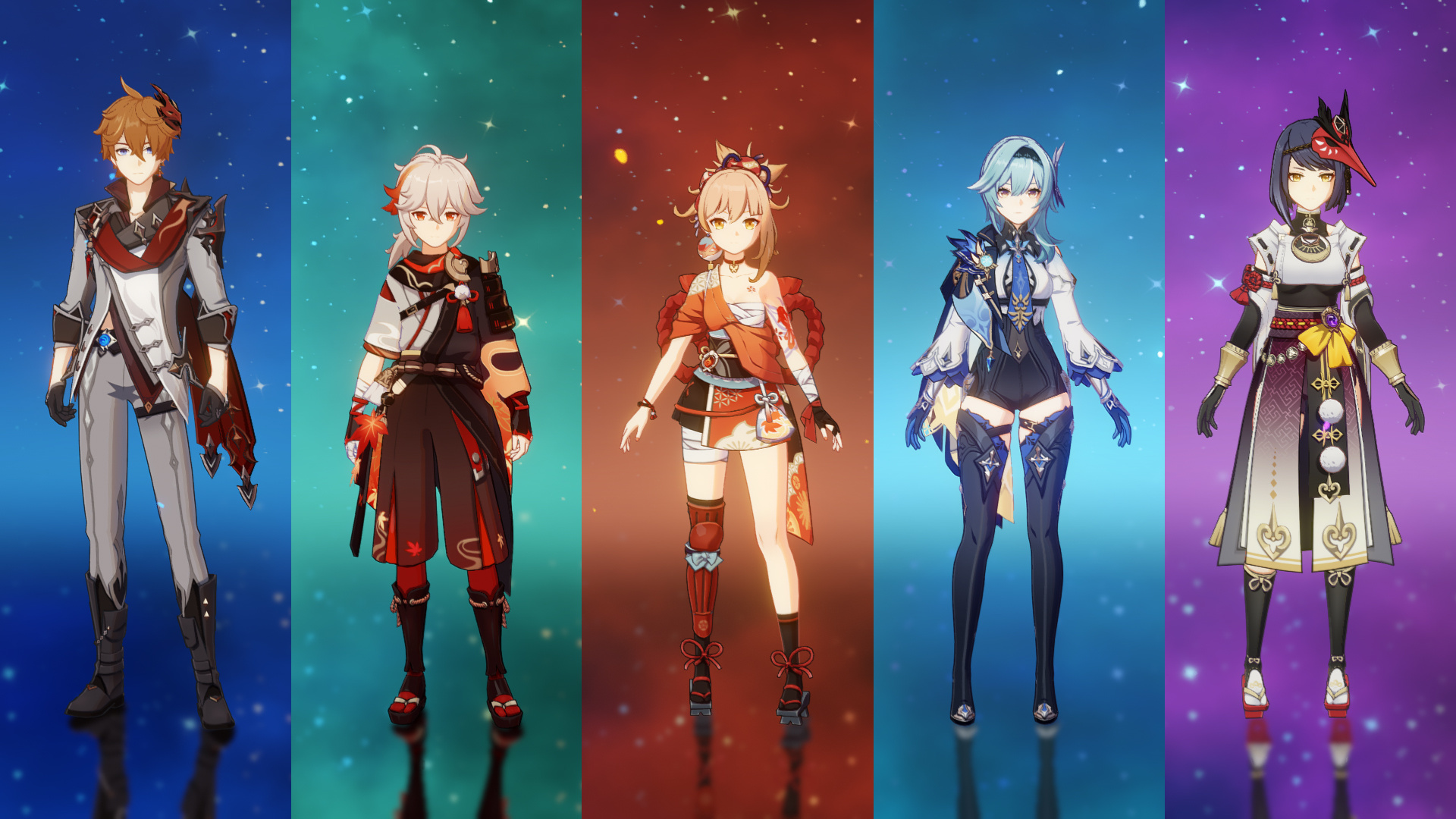 Baal fits best in groups with energy-consuming ults, because this increases her damage, and she, in turn, quickly restores energy for the explosions of the team’s elements. If you suffer from not being able to roll party-wide ults on cooldown, Baal is definitely for you.

There is also a chance that now we do not see its full potential, because many heroes are revealed over time, when new and new characters come out.