Review of Maid of Sker. Capcom, let me write it off! – review addiction

The Maid of Sker by R. D. Blackmore

The old Welsh ballad Y Ferch o’r Sger, also known as “The Sker Maiden,” was written by poor harper Thomas Evans about a girl named Elizabeth Williams. Her stern father was against their union, and the lovers tried to escape, but they were prevented by the barking of the dog. Elizabeth was locked in her own room for many years and forced to marry. And nine years later, in 1776, she died – they say, because of a broken heart.

In Welsh urban legends, more attention is paid to the “posthumous” life of Elizabeth, because the Sker mansion is one of the most famous haunted houses. Talk about how Thomas Evans tries to sneak into the house from the tyrant father and save his beloved, studio Wales Interactive collected in 2018. But then a remake came out Resident evil 2and everything changed.

Long ago, the keeper of the lighthouse on the coast of Welsh Bridgend understood a simple idea: you can make money on ships, but only if they crash before that on the local rocks. In this venture, Williams Sr. was helped by a strange and pathetic creature – a siren found in the wreckage of one of the “accidents”. Over time, her song was learned by Prudence, Elizabeth’s mother, and successfully lured visitors to the hotel built with “ship” money. But Prudence died, and in just two or three years the hotel fell into disrepair. And then Isaac Williams, Elizabeth’s uncle, understood: it was necessary to revive the invocation song.

But this is all background. Act Maid of sker begins in 1897 when Thomas Evans gets off the train at the forest stop and finds himself in the prologue Resident evil 7… He was called on the road by a letter from Elizabeth, who soon contacts him by phone and explains her request: you need to find four cylinders with fragments of the mother’s song in different parts of the mansion. The girl believes that if you play them in a certain way, you can bewitch the guests and staff. 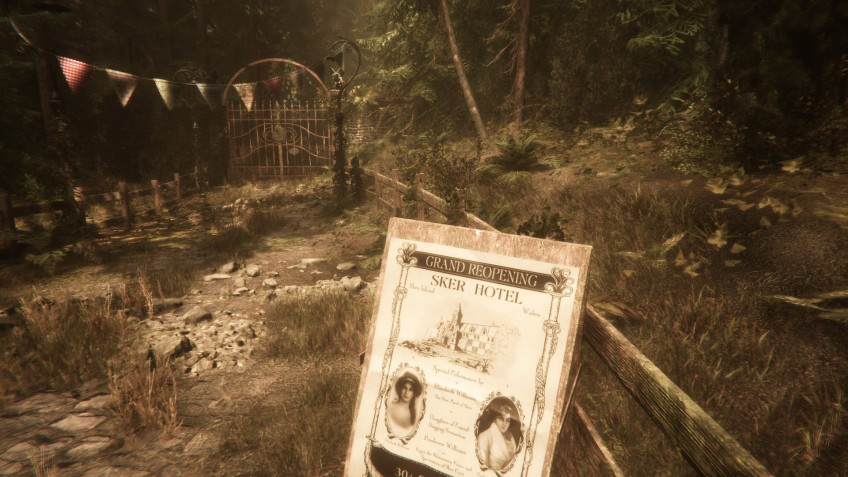 The main entrance is in front of us, but to get to the Baker’s house … sorry, the Sker hotel, you can only take a roundabout way

Once inside the hotel, Thomas finds himself in the police station from Resident Evil 2 – a source of inspiration is read quickly thanks to the style and architecture. Here we collect map fragments in the same way in order to understand the structure of the floors, and save the game in safe shelters, only instead of the usual cassette recorders – old gramophones. And the building, of course, is patrolled by local “zombies”, fascinated by the siren song – even the local Mr. X is in a trench coat and hat. The only pity is that the weapon is a little tight.

The largest and most expensive game, Wales Interactive, looks tatty – much duller than in the trailers. While Thomas walks to the hotel along a sun-drenched forest path, you can admire the landscape endlessly, but the charm quickly fades. They tried to disguise the modest textures of objects and interiors with “antique” sepia, blur them with blur, cover them with twilight and dust them with dust. It didn’t help much: everything just merged into a monotonous gray-ocher mass, and attempts to tweak the settings sliders do not change the picture. At the same time, despite the modest graphics, the art designers clearly tried their best. The premises of the hotel, especially the rooms of the Williams family members, provide a glimpse into the simple stories of their inhabitants, and the interiors can be admired for a long time, considering the details. 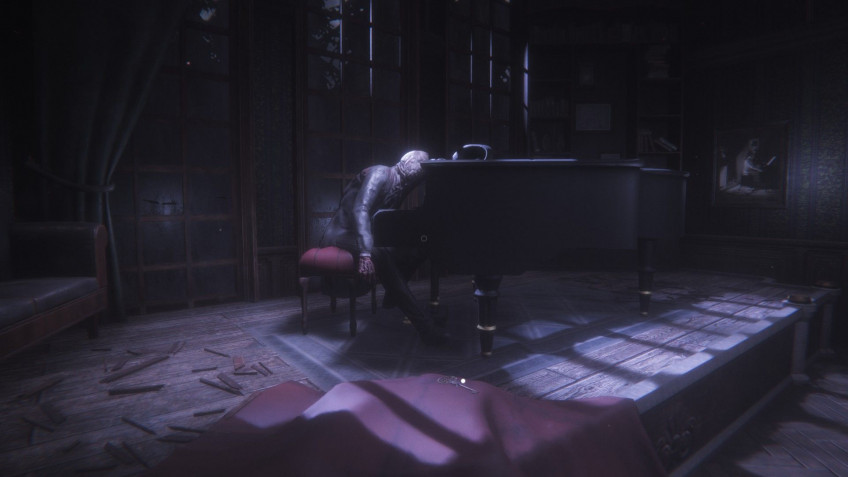 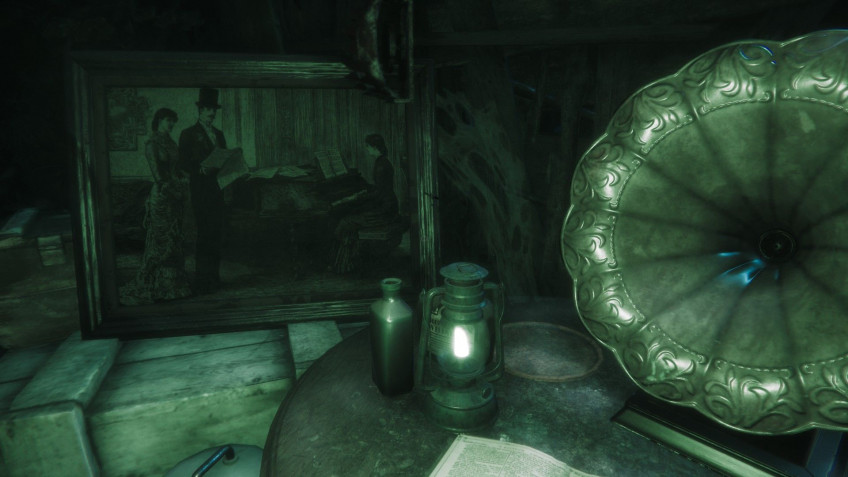 The main theme of Maid of Sker is not horror, not domestic violence, not dangerous experiments, but music and only music

It’s a shame there won’t be time for that – soon after the start of the trip, the first guests appear at the hotel. Under the influence of the song, people with bags on their heads purposefully stomp along the corridors and rooms. They are blind, like football referees, but they hear perfectly: the whole stealth mechanics is built on sound. The sentries search for Thomas by breathing, and he has to pinch his mouth and nose so as not to give himself away. Cough is the most dangerous enemy, so clouds of dust and purple smoke of traps promise dangerous consequences. And you won’t be able to hold your breath for a long time: the screen gradually darkens, and after a minute the hero inhales loudly – and this attracts the attention of the bagheads. 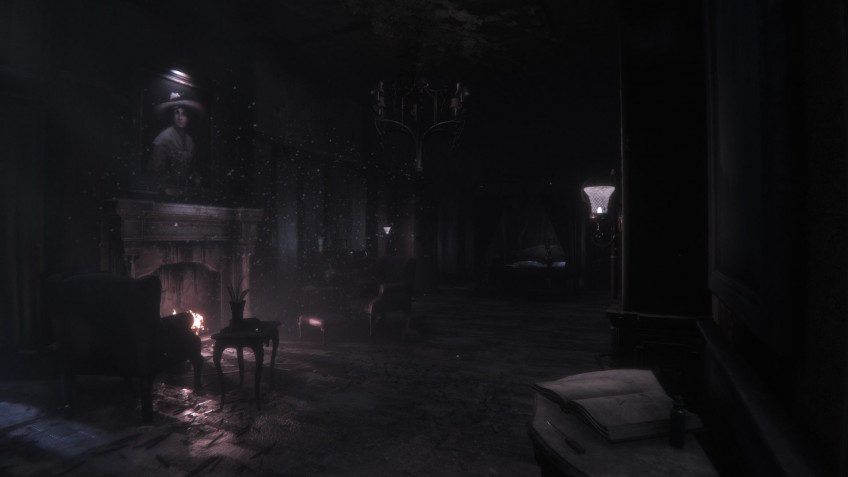 Thomas coughs if he gets close to the fireplace

How did you find me?

The mechanics of sounds and breathing are one-piece, they are well thought out. Everything would be perfect if the human factor did not interfere: artificial intelligence and bugs. Dummy sentries are as stupid as corks. Their route is laid on reinforced concrete rails, and theoretically it is not difficult to get around them – especially when the player explores the hotel like the back of his hand. But during the first passage it is not worth running into a baghead in a locked room, in a narrow corridor, right outside the door of a safe room or around the corner: from time to time they freeze in place, and without the sound of footsteps it is difficult to figure out where danger awaits. 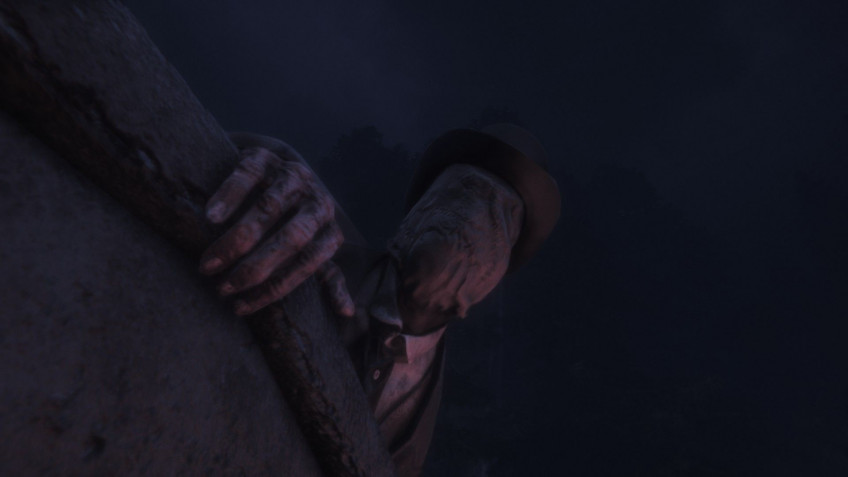 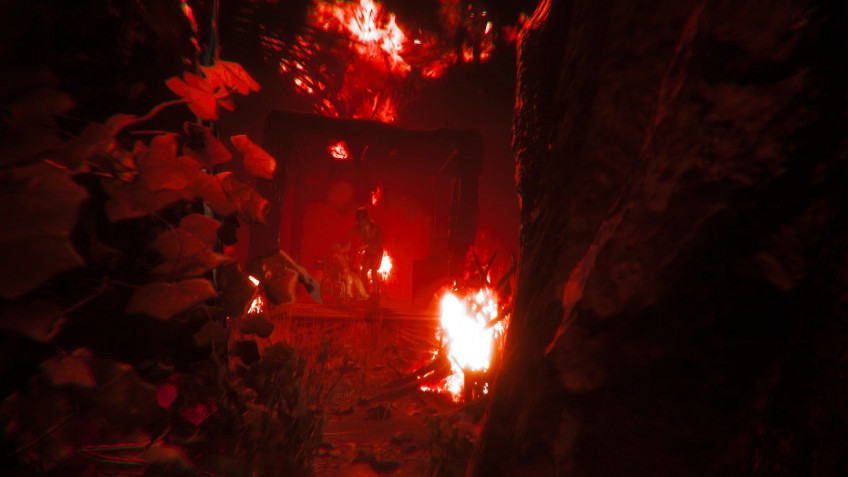 Elizabeth’s father, Jebedaya Williams, does not harm the player until the very end, but he catches up to the conscience.

Some features of AI are difficult to explain in principle. Enemies ignore Thomas as he crashes through bushes, crunches gravel and stumbles over furniture. But if he quietly sits in a corner, there is a great chance that the sack-head will be noticed, sniffing the air, ten meters away, and rush into a fight. Or here’s another example: a mechanical gate in a garden is triggered with a loud clang. It is logical to assume that all garden dummies will rush to the sound – they are. But if, after opening the lock, you immediately jump to the side and hide nearby, then the sentries will ignore the gate and immediately attack you. Just because it was designed like that.

Thomas is not supposed to have weapons, so it will not be possible to clear the floor so that you can calmly explore everything, as in Resident Evil, also because the bagheads are gradually multiplying and expanding the patrol zone. At the right time, the hero will be able to get hold of a sonic bomb, which stuns all the surrounding sentries for several minutes, allowing them to carry off their feet. But, spoiler, towards the end of the game and it will be taken away. In addition, the device uses up already scarce cartridges. Also, the stunned dummies spread out squatting and regularly block the passage. There are no survival mechanics in Maid of Sker as such. All that is allowed to Thomas is to kiss the flask, restoring health. Or morality. Or nerves – go and figure out what kind of harm the bloody frame around the edges of the screen means. 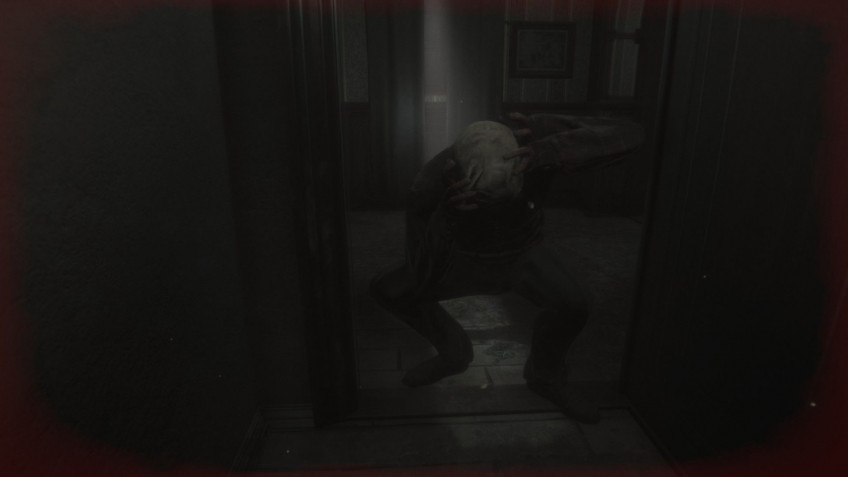 In a couple of seconds, this savant will come to his senses and finish off Thomas

Imagine the situation. You walk down the hallway and see a door to a small storage room. Obviously, this is in order to hide from the oncoming sentry. You do what the game seems to suggest doing, but a surprise: the enemy instantly notices the hero in a seemingly specially prepared shelter. But on all floors there are huge wardrobes – surely in order to hide in them, as in Hitman? No, they’re just wardrobes. Maybe the developers thought about introducing such a mechanic, but it did not come to the point.

What to do when you can’t get away and the saving flasks have come to an end? There is only one thing left: to die and go to the last save. They are exclusively tame here: progress is recorded only with gramophones, and, in theory, one should often return to them. But there are exactly ten of them for the whole game! We count: basement, garden, first floor, second floor, third floor, attic … For such a vast territory with complex geometry and enemies at every step there are very few save points. In addition, it is not a fact that everything will go as it should, even if you regularly save. When I reached the second floor, I happily poked at the nearest gramophone and went to bed. And the next day I downloaded the game and found that Thomas was hanging out in the greenhouse in the garden. Saving stupidly disappeared, several hours of passing down the drain. 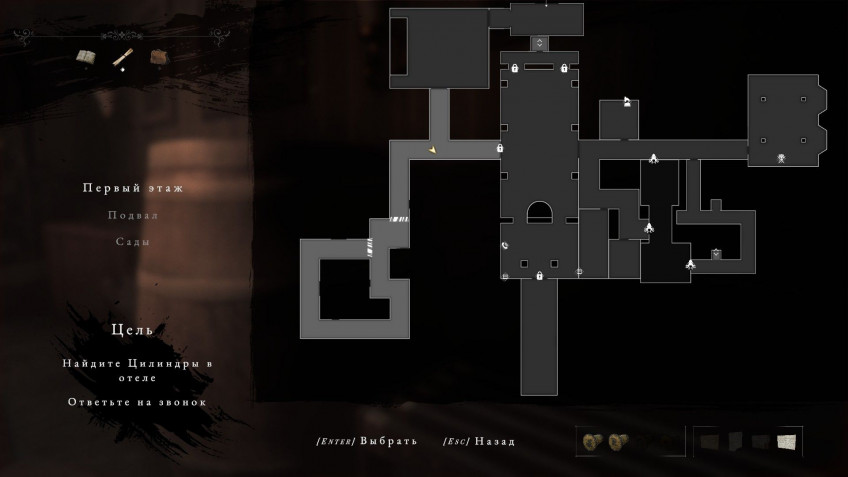 All important places that we might have missed and save points are marked on the map. As you can see, there are not many of them

The creators of Maid of Sker have written a dark and gripping Gothic novel about the fate of the Williams family. They picked up great music and permeated the entire game with original, working sound mechanics. They came up with puzzles that naturally fit into the environment. But the elements of other people’s games, albeit transferred to new soil, did not bear fruit. Probably because their roots remained there, in their “homeland”. Here, the gameplay, which was intended to be intense, becomes monotonous and annoying due to the constant backtracking. 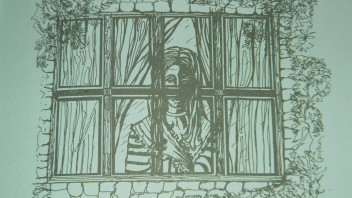 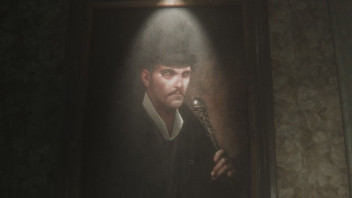 What: the key is provided by the publisher.

“I was looking for your grave”

Cut twenty circles around the cemetery, failing to notice the only active point

Russian localization is good for those who yearn for glorious days “Fargus“. Texts and dialogues look either soullessly machine-like, or full of inappropriate amateurish pathos. Sometimes, due to the literal translation, the meaning of the phrases completely disappears into the sand. In addition, the localizer (s) would benefit from the help of a proofreader or at least just a literate person. 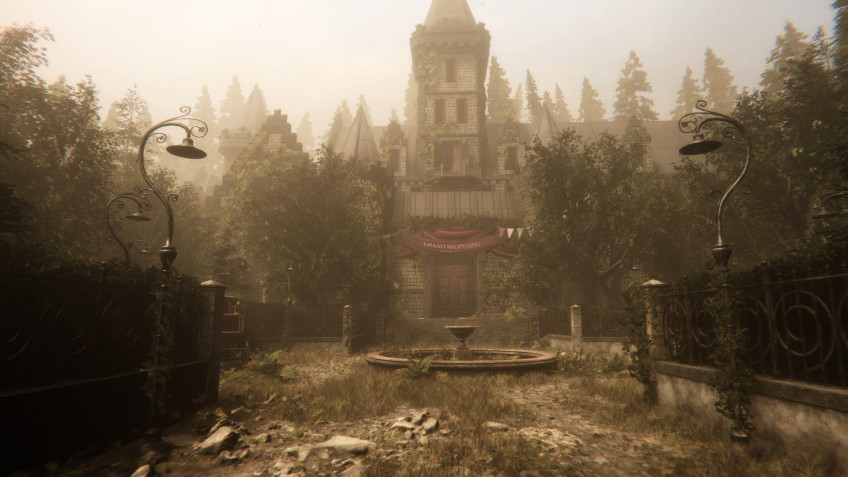 There is nothing wrong with creative borrowing and copying. This will be called homage, easter eggs, “love letter” or homage – if copied well. Alas, this is not the case with Maid of Sker. It’s a shame, but excellent original finds pale against the background of ineptly borrowed mechanics.