Preview of the LPL semi-final between TES and RNG. 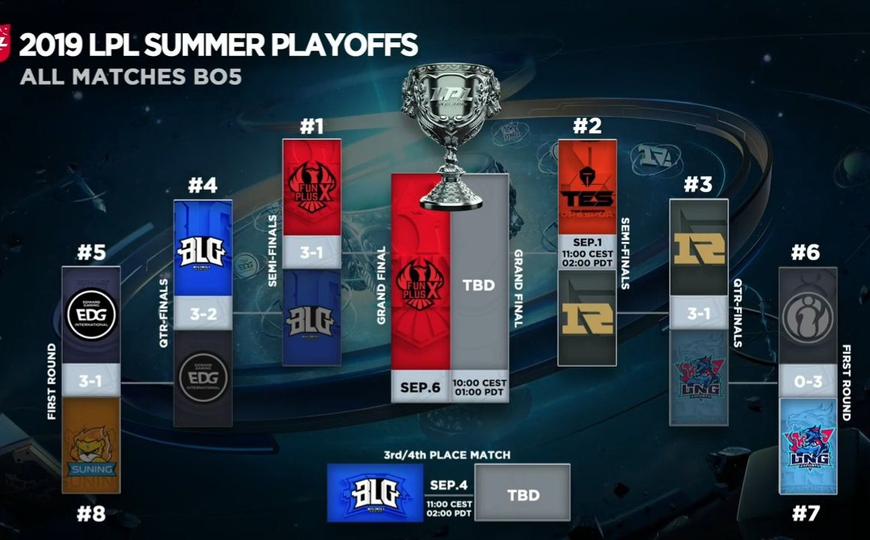 A few words about the main match of the outgoing week.

Good day. For personal reasons, it was not possible to make a full-fledged preview of the semi-finals, but a match taken separately today just needs to be discussed. Enjoy reading!

What is at stake?

Let me remind you that to enter Worlds 2019, teams need to either win the summer split or overtake competitors in the fight for points. Consider all possible outcomes after the upcoming game:

1. RNG lose, but win the match for 3rd place: TES get an invite to Worlds, RNG participate in the first match of regional qualifications.

2. RNG lose both matches: TES receive an invite to Worlds, RNG do not qualify for regional qualifications.

3. TES lose, but win the match for 3rd place: TES participate in the final of regional qualifications, RNG get an invite to Worlds.

4. TES lose both matches: TES participate in the first match of regional qualifications, RNG get an invite to Worlds.

Things are such that if RNG wins, both today’s rivals will get a chance to play Worlds. However, after the victory of TES, the “royal club” will have much harder.

Royal Never Give Up

To understand the state in which the RNG approached the match with LNG, I advise you to read the previous material.

The guys remained that very team that makes unimaginable peaks that contradict the established setups. Even if we drop Rambla, whom the RNG has been practicing for a long time, the Mordenkizer election for two different roles (Top / Support) and the first Morgan in recent weeks LPL (except for their peak against JDG) are surprises that can unpleasantly surprise TES. Certain difficulties can arise during the irligame, since RNGs have a monotonous habit of saving the economy in the forest. Scenario two:

– Considering the RNG setups with a weak skill, but an excellent starting game, guys can do from 3-5 gangs to 10 minutes, and gather up to 15 twice at the den.

– if before the start of the gang / attack on the dragon, not everyone managed to converge, then the RNG become a defenseless target.

Conclusion: RNGs can pull out a failed irligame, but for this everything should be too perfect. On exactly the same team interactions (which the team noticeably improved during the preparation), even a bad scale is completely replaced. If we evaluate the RNG drafts, then the propensity to control not only remains, but also transforms. Of those peaks that the team used against BLG, the usual Alistar and Jarvan IV were not in use, but Morgana and Mordenkizer appeared. Another headache may be poor initiation, but in most cases, the RNG deliberately wait for the first step to correctly beat the opponent. Finally, it is also possible that, in the presence of a multitude of control, the RNGs are “nanked”, and stopped opponents simply cannot be finished off.

Tracked progress and in the individual performance of players, as well as situational actions. A month ago, I wrote that RNGs sometimes completely pointlessly go to the aid of a doomed teammate, wasting time and resources. As you understand, there were no such errors against BLG. Separately, I want to note the statistics of Xiaohu: it is far from an ideal midlane (the highest death rate in the playoffs), but in reality the player plays the role of a kind of “baiter”. This is evident in those moments when the team needs to retreat / finish off the “fat” champion. Then, when Xiaohu is required to take all the attention and damage onto himself. To this day, Karsa remains extremely unstable, even experimental peaks cannot save it.

The last matches of TES turned out to be not the most successful, but they left bright spots and an aftertaste with hope. At the end of the regular season, analysts began to track the team’s transition from AoE damage to solo damage. We will draw conclusions from the match against FPX, where some moments of such a blank open. Both positive and negative.

Throughout the series, it struck me how TES manages to correct the most serious flaws:

– Of course, the setup above (and others like him) will suffer from a lack of health at important points. Therefore, TES try to pick up at least two champions with a draft to restore health or save teammates (Yumi / Vladimir / Taam Kench).

– If you look at the level of control, then RNG and TES are heaven and earth. However, realizing the mistake, the guys from TES took Camilla and provided themselves with a very useful ult. It did not work out, but on paper the team did everything right.

– even before FPX there was a team that overtook TES at a pace. This team was EDG. In both cases, our heroes lost the irligame, but climbed out at the end of the game. The problem is that TES high-speed champions are not often taken, and RNG is far from the heart of the EDG level in order to take away the leitgame from opponents’ mistakes.

(The third paragraph is supplemented by the fact that for a successful exit to the ending TES must play the first number and keep the opponent in fear. In the opposite case, you have to defend endlessly and put yourself at risk).

A month after a face-to-face meeting with RNG, the roles of both teams changed. Now TES is a team that has demonstrated all its mistakes and can slip on them, and RNG is a progressive favorite, playing perfectly on the opponent’s mistakes.

It was hard to say anything about TES when they played the last game almost 3 weeks ago. Based on the described, the forecast should be made exactly on RNG (approximate score: 3-1). The fact that the latter are relentlessly experimenting proves the existence of “Plan B” in any heavy series. If RNG needs to increase the pace, then they will squeeze out the draft phase as efficiently as possible in this direction, if you count on fights in midgame – not a problem. The width of the TES pool does not inspire such hope, and even the ability to correct errors on the fly may not save. I would definitely not recommend betting on this match, but you should definitely watch it.