Today we have a motherboard on tests ASUS Z590-E Gaming WiFi for processors Intel… In general, the E Gaming series from ASUS is quite interesting: if you do not talk about extreme overclocking under liquid nitrogen, then these glands can do almost everything that Hi-End solutions in the person of some Apex or Extreme, but for much less money. I am ready to state this responsibly as an overclocker enthusiast sitting on ASUS B550-E Gaming from the first appearance AMD Ryzen 9 5900X… 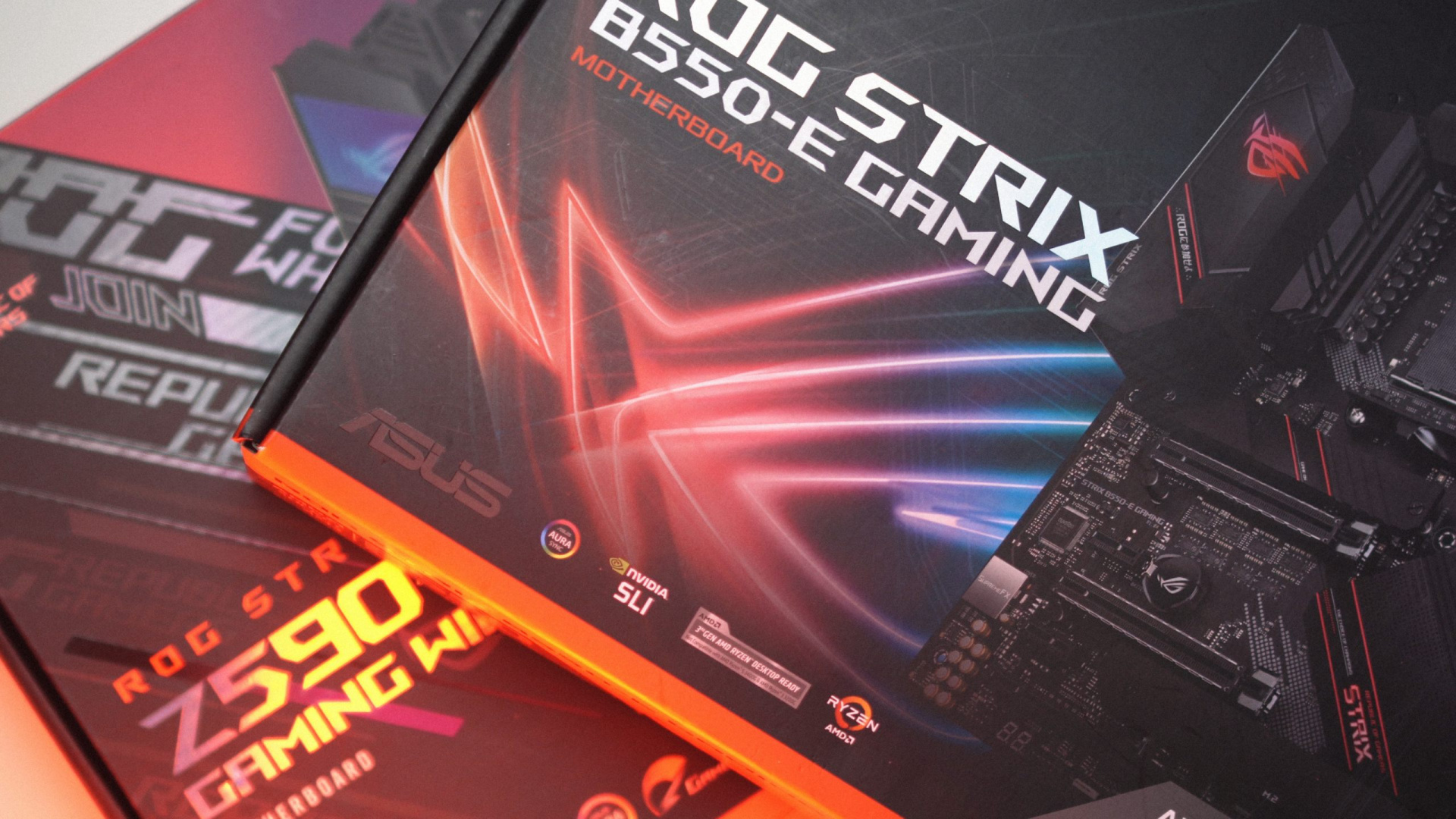 On this board, I drove it in both the tail and the mane for almost two months while studying the features of the new platform. LinX, Prime95 and TestMem5 with extreme testing presets – all this was spinning non-stop almost 24 hours a day, and the board survived. Seven months have passed, I still have the motherboard, and the only drawback that I would highlight from it after so long is the lack of a BIOS reset button on the body of the board. Let’s see what flaws we can find in the Z590-E Gaming.

The design is familiar to ASUS: matte black textolite, massive protective cover of the I / O-panel with integrated I / O Shield, branded logo filled with RGB-backlight ROG near the VRM cooling system and a bunch of radiators.

For convenience, we have the ability to flash BIOS from a flash drive without a processor and RAM. There is a BIOS reset button on the input and output panel, there is an on-board indicator of POST codes and LEDs that will indicate what exactly the problem was with a failed start: with memory, GPU or CPU. Not a bad set – poking around in the memory subsystem and adjusting the CPU will be convenient, plus you don’t need to close the contacts with a screwdriver, like on my B550-E Gaming. 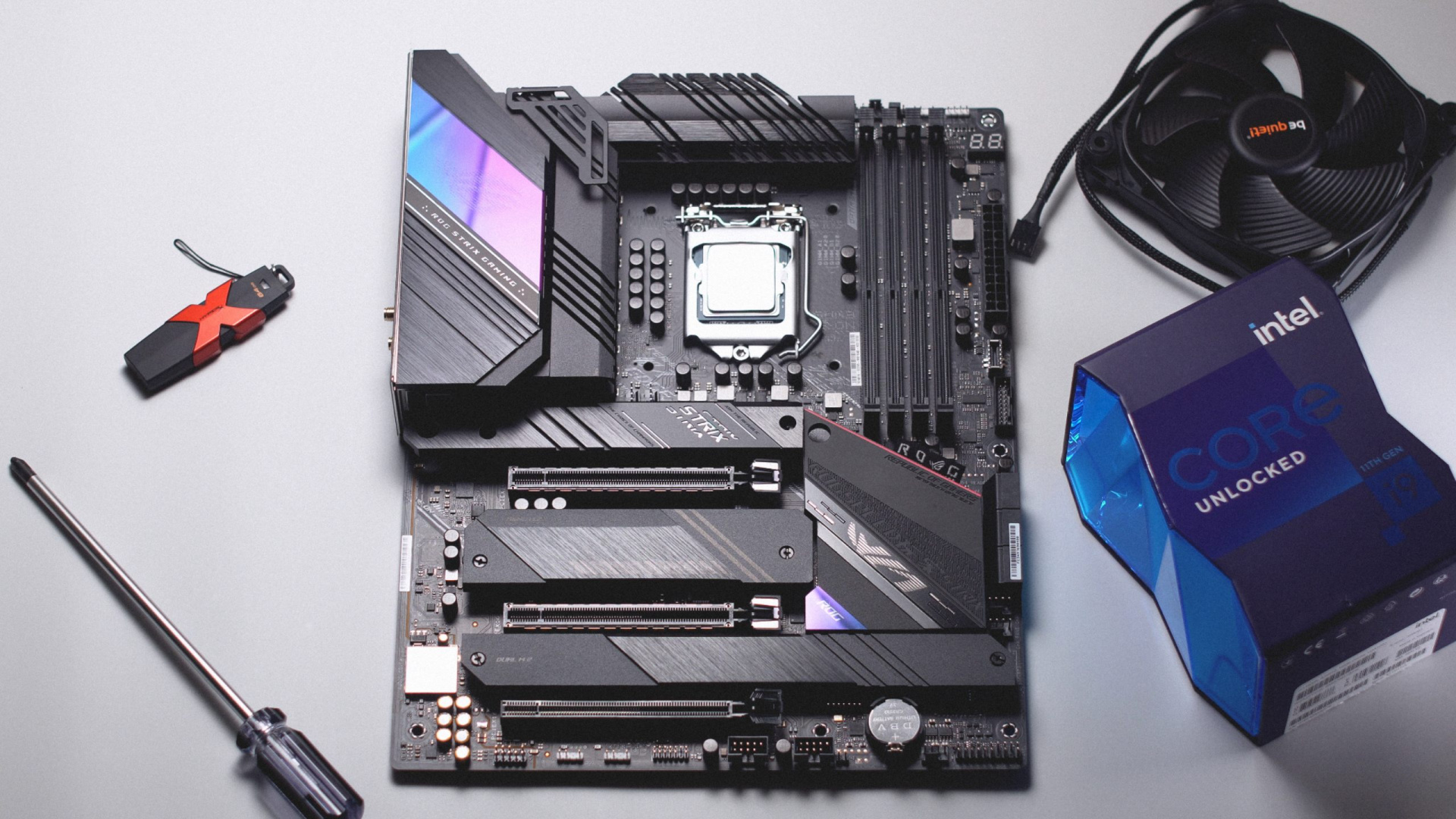 In terms of connecting peripheral devices, everything is also not bad. The Z590 has 24 PCIe lanes – accordingly, the board managed to accommodate enough PCIe and M.2 slots for a home PC. There are three first ones: the top one works in PCIe 4.0 x16 mode, the second in x8 mode, and both are connected directly to the processor (provided that the Intel Core Gen 11 — Otherwise PCIe will switch to 3.0 mode). The last, lower slot operates in PCIe 4.0 x4 mode and communicates with the system via the Z590 chipset. Unfortunately, there is no x1 slot, as it was donated for the sake of M.2 drives, of which you can put four in the Z590-E Gaming. However, it is worth considering that the upper M.2_1 will work only with the 11th generation of processors, and in the case of Comet-Lake will shut down and be unavailable.

By the way, only the last, lower connector has support for SATA drives – the rest “understand” only NVMe drives. And one more thing: the top three slots can accommodate drives up to 110 mm long, the bottom one – up to 80 mm. And, according to tradition, the lower M.2 shares resources with one of the SATA interfaces, and they cannot function together. However, there are six SATA connectors, so it’s not a big deal: there are five more left – and there shouldn’t be a shortage of drives that can be connected. Anyway, if we talk about a standard home PC.

Regarding RGB lighting, this is in complete order: those who want a rainbow-colored PC have a place to roam. There are four connectors for connecting RGB tapes and the like, three of which are addressable. All this is synchronized, as always, by means of the onboard chip AURA and the corresponding proprietary software. 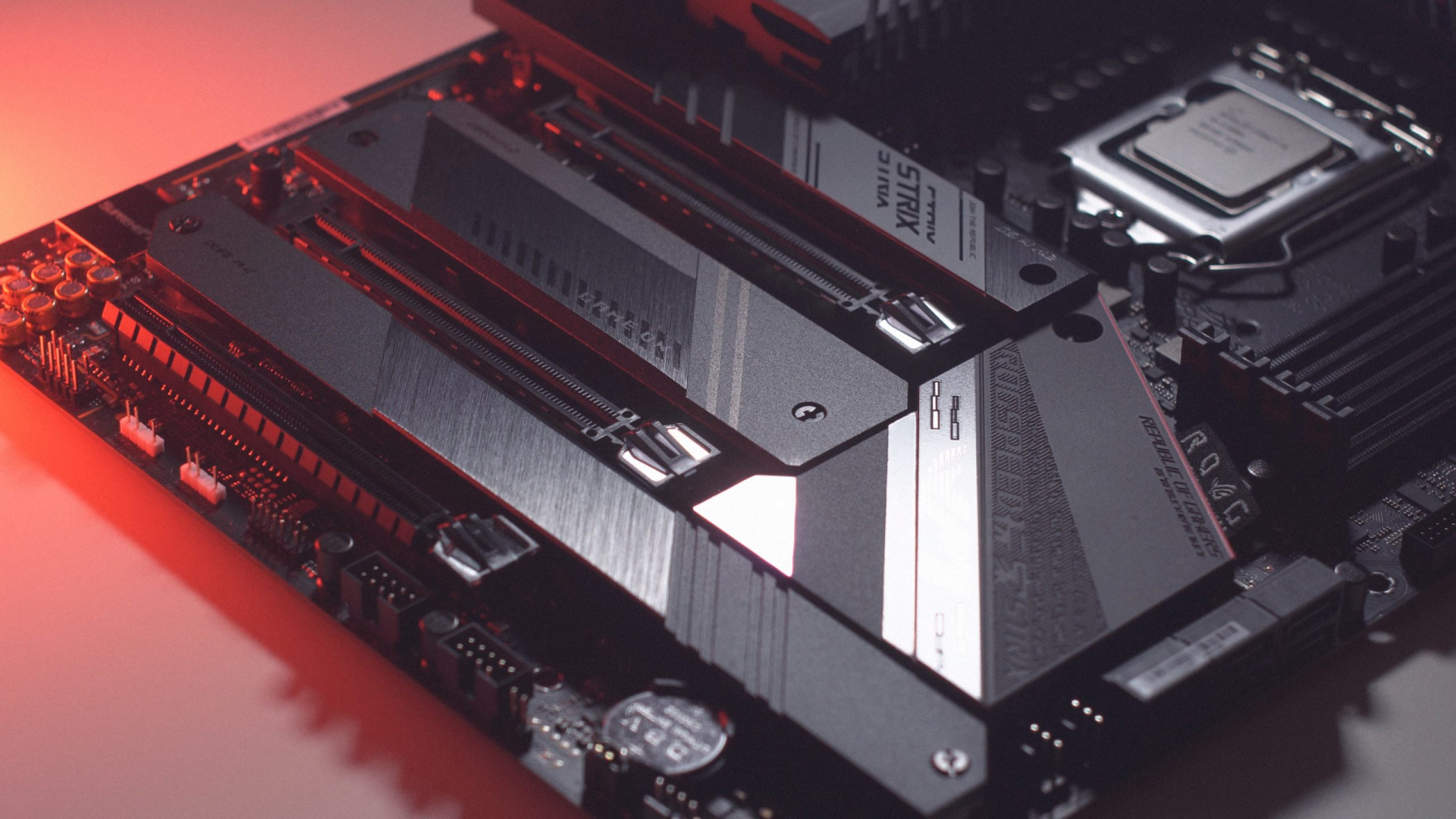 I would also like to say about the sound. Firstly, a new codec is soldered on the board. ALC4080; secondly, there is an amplifier based on an “opamp” Savitech SV3H712… All this plays well. Powerful amplifier: headphones Sennheiser HD 660S at signal levels above 50% it was already impossible to listen – too loud. Well, as for the quality, I would say that I would not think about purchasing a separate, internal sound card for up to 10 thousand. The increase will be either quite insignificant, or it will not be at all. 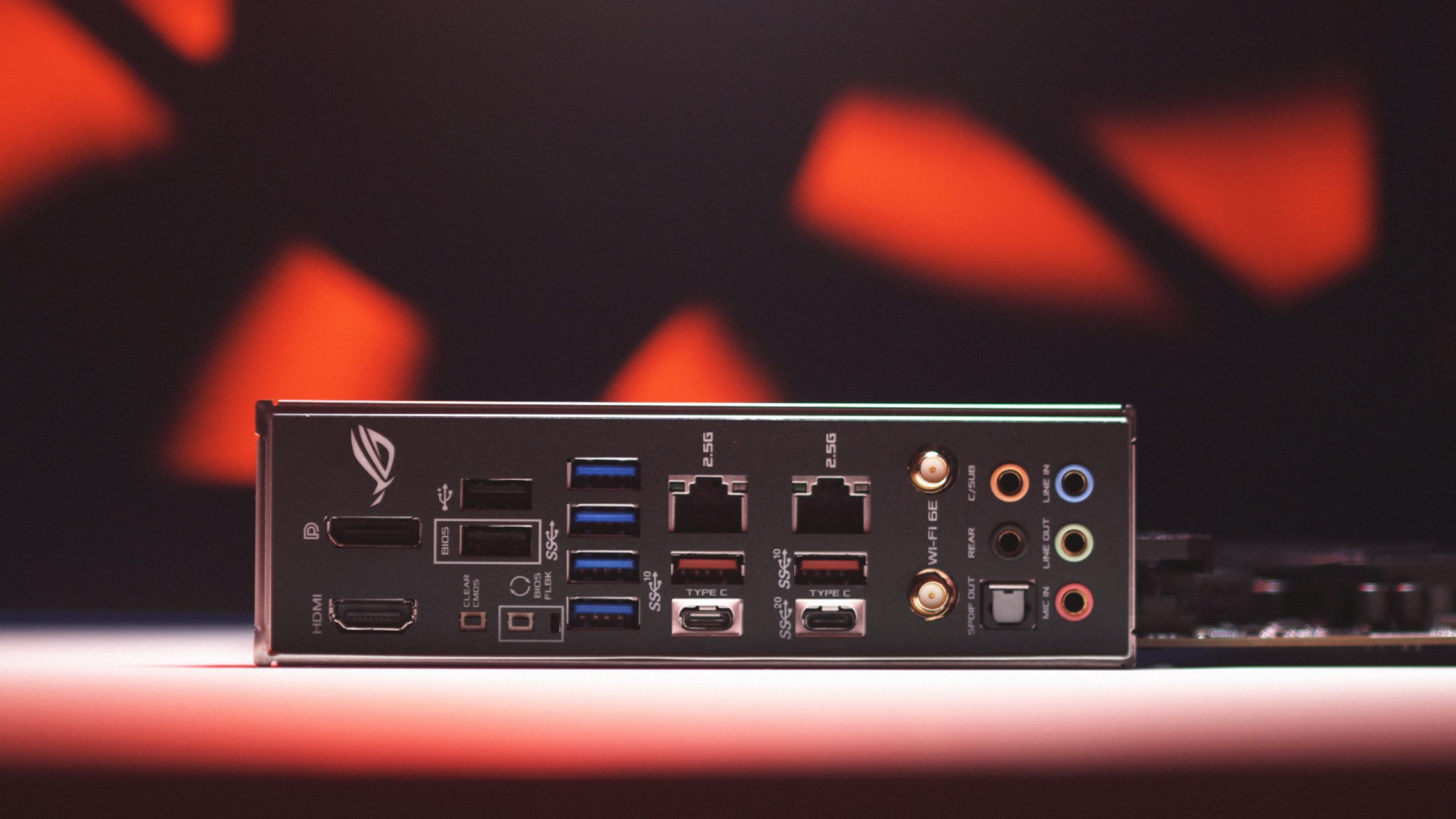 Finally, a few words about peripheral capabilities. There are 10 USBs alone: ​​two USB 3.2 Gen2x2, the same amount of USB 3.2 Gen2 Type-A and USB 2.0 Type-A, four USB 3.2 Gen1 Type-A, and there are also hubs soldered on the board. Next come HDMI 2.0b, DisplayPort 1.4 and two Ethernet on Intel I225-V with speeds up to 2.5 Gbps. Plus on the motherboard is present Intel AX-210NGW, which means that there is onboard Wi-Fi 6E and Bluetooth 5.2 support – in general, “full stuffing”.

The Asus Z590-E Gaming is made on a six-layer printed circuit board with a Daisy Chain topology: the memory channel connectors are connected in series to the processor, which means that the best overclocking results should be expected when all four RAM modules are installed. Officially, the motherboard supports frequencies up to 5333 MHz, but this is with one memory module installed in the slot closest to the processor. Simply put, there is no point in focusing on this figure – at best, you can boast of a beautiful screenshot on the forum, provided that you have the finest memory in your hands.

In real life, the results are completely different. 11th Gen Core memory controller redesigned to resemble memory controllers AMD Ryzen with architecture Zen 3… It either runs at the frequency of RAM in a 1: 1 mode (Intel calls this Gear 1), showing the greatest efficiency, or switches to 2: 1 mode, and here you can already heat up the memory to exorbitant frequencies. The similarities don’t end there, as the overclocking ceiling in Gear 1 mode is exactly the same, if not lower. For example, I managed to overclock to 3733 MHz with timings 14-14-14-28 CR2. 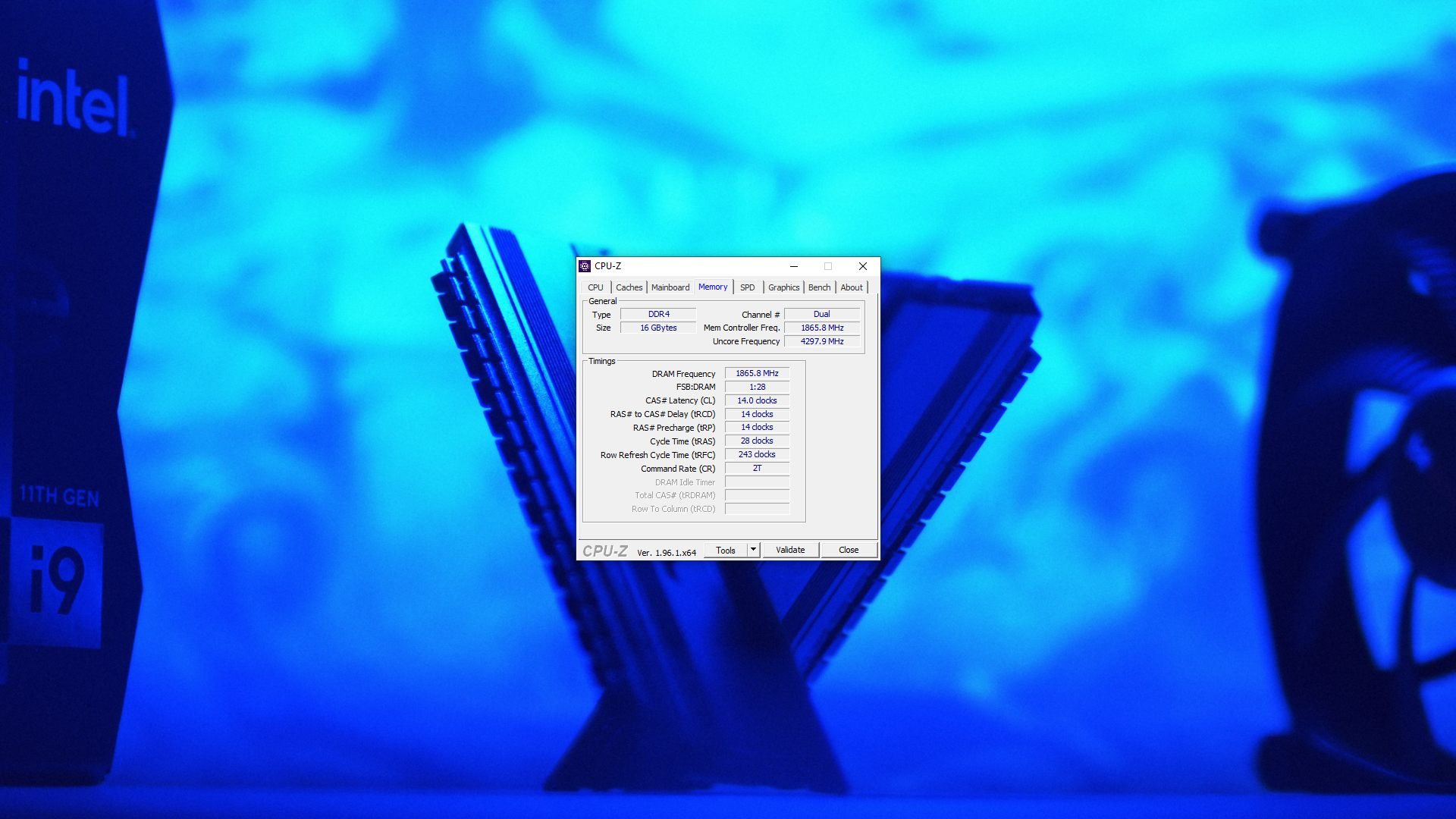 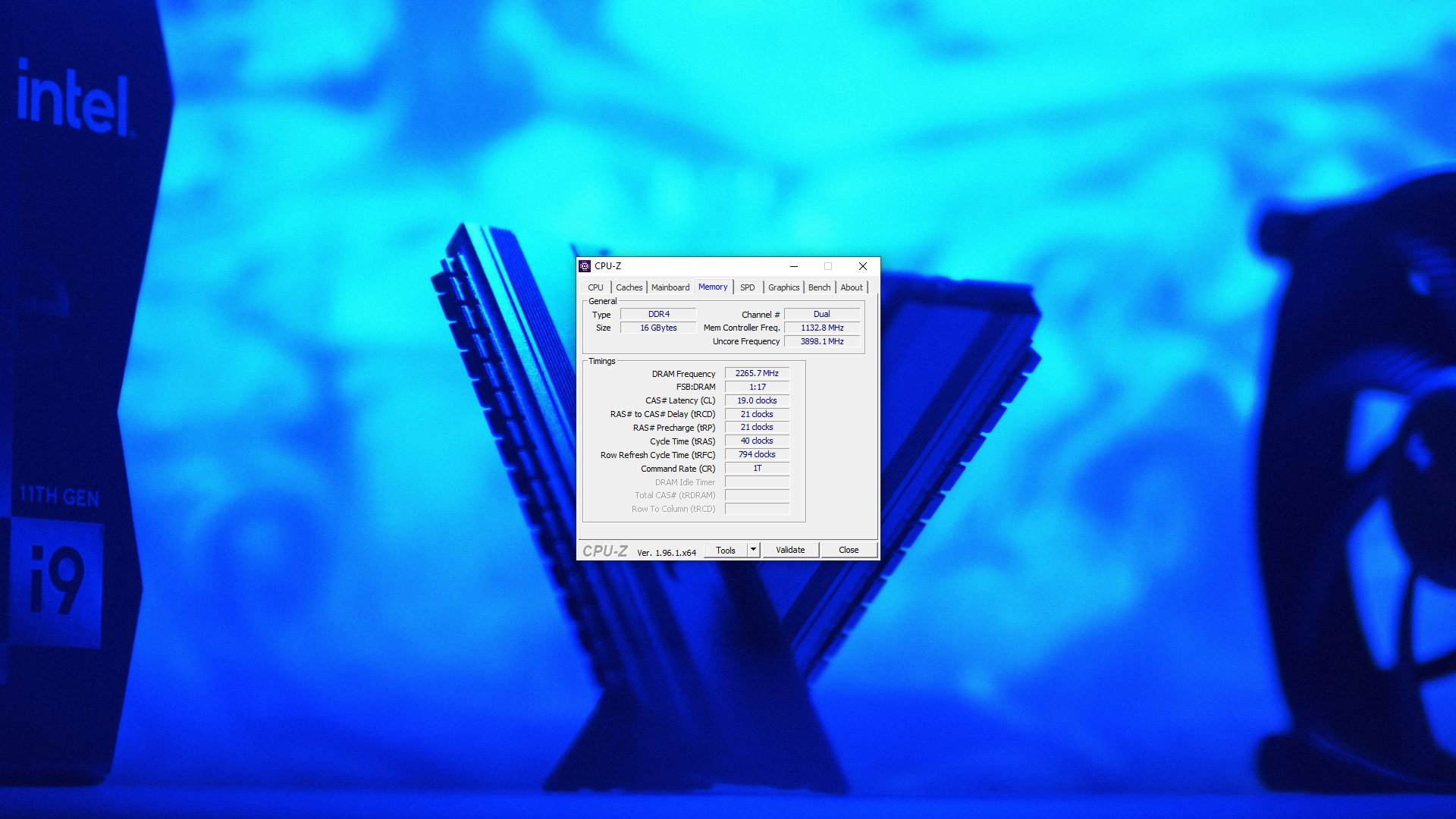 Now for the 2: 1 mode or Gear 2… Things are more fun with him: I took 4533 MHz at CL 19. What is the use of this remains to be seen in the benchmarks, but if the Gear 2 from Intel works the same as that of AMD, then, most likely, none. In short, let’s see – do not forget to let us know in the comments, you are interested in the result of such testing. If there is a demand, we will prepare the appropriate material.

But back to memory. Still, there are certain nuances with her that you need to delve into: for example, her training was, frankly, unusual. With the manually set values ​​of RTL Init, IOL Offset and RFR Delay, attempts to “train” correctly failed, and the board showed “weather” instead of adequate DRAM IOL values. What this is connected with is still unclear – I think there are some changes in the training process caused by controller updates. We will find out. 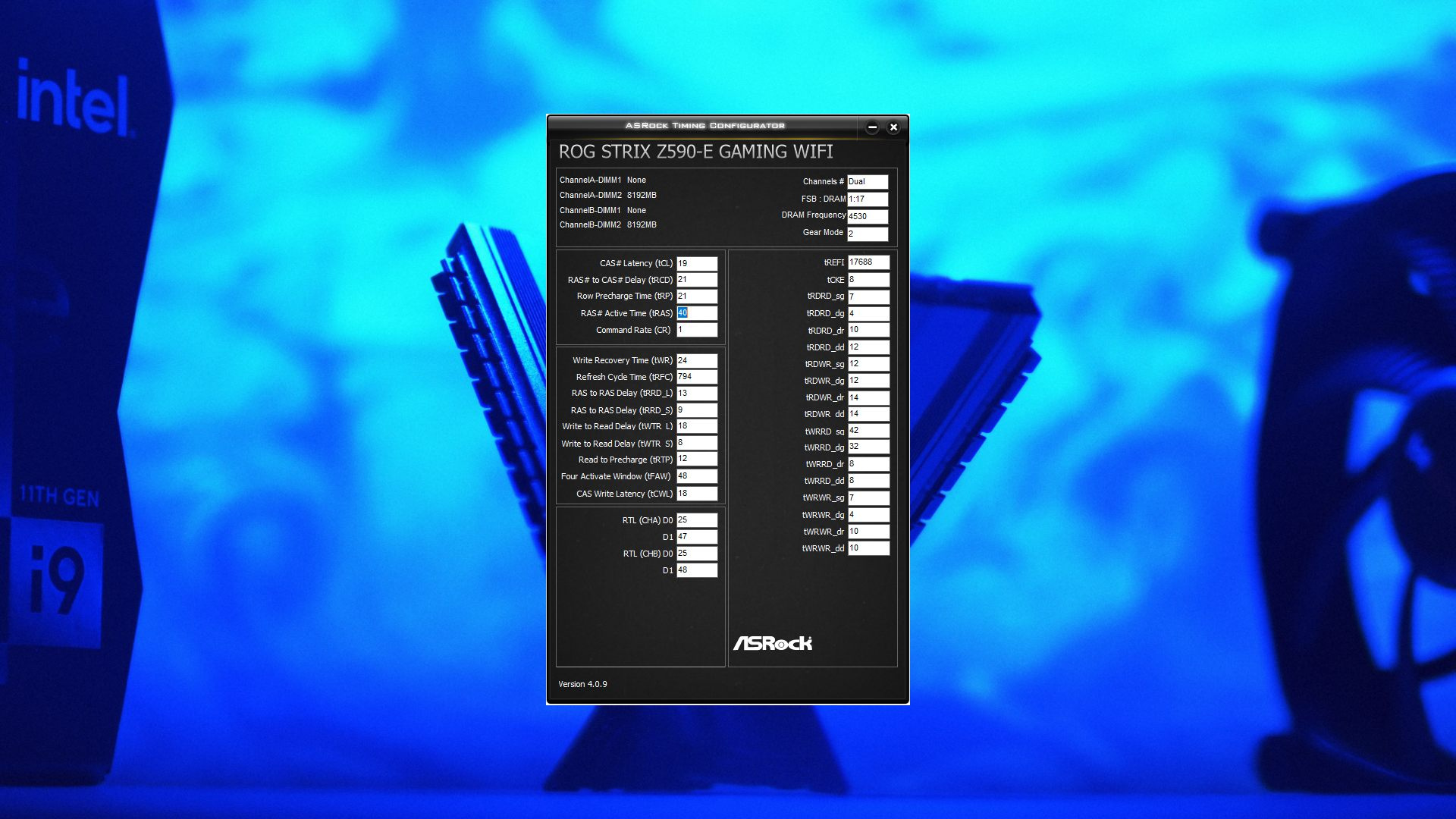 Now let’s talk about the VRM board. There are no complaints at all – I would even say that its power subsystem is simply redundant. 17 lines without doublers are used (14 are on the cores, two on the VCCIO, and one serves the integrated graphics) with a 70 A MOSFET. All this beauty is covered by two massive heatsinks made of aluminum with developed fins, and they are connected to each other by a heat pipe. 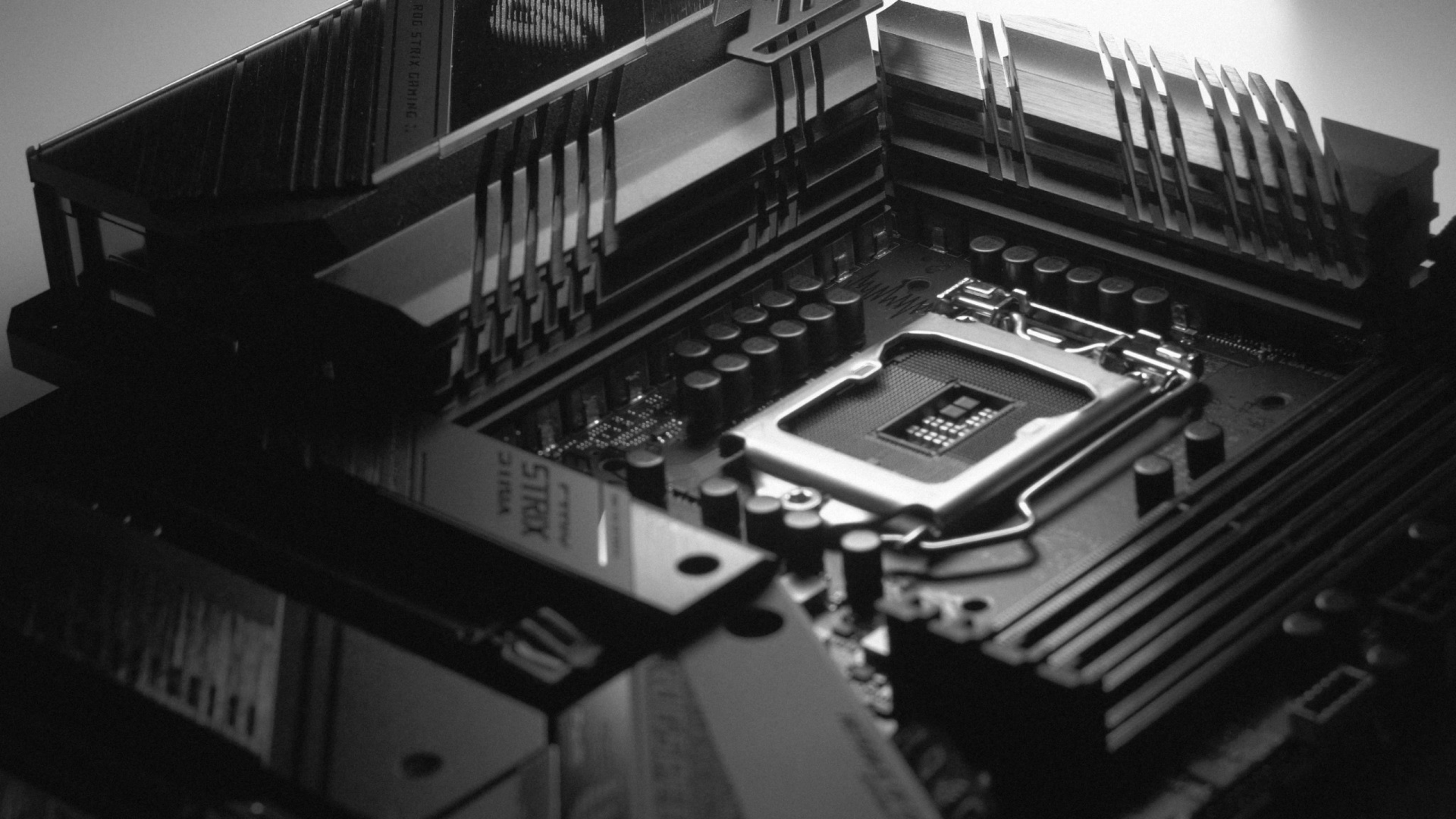 To be honest, they could have been removed altogether, and this would have been enough to work with the processor in the factory form. Judge for yourself: after three hours of LinX (with a stable GFLOPS value of ~ 560 in each pass), the radiators warmed up to 60 ° C. This is with AIO, in an open stand, which means, without any airflow at all. The question arises: why, in this case, do you need a small fan that comes with the board to blow the VRM? It is absolutely out of place here: there is enough passive cooling with a margin. In general, the power unit of the Z590-E Gaming is actually quite suitable for experiments on a processor under liquid nitrogen. And the funniest thing is, apparently, this is the only way to overclock it in any significant way. Power consumption limits for all motherboards with the Z590 chipset are now removed by default, so the only limiting factor is temperature. After adjusting the memory in the very first AVX test, we have 8 degrees to TJMax! 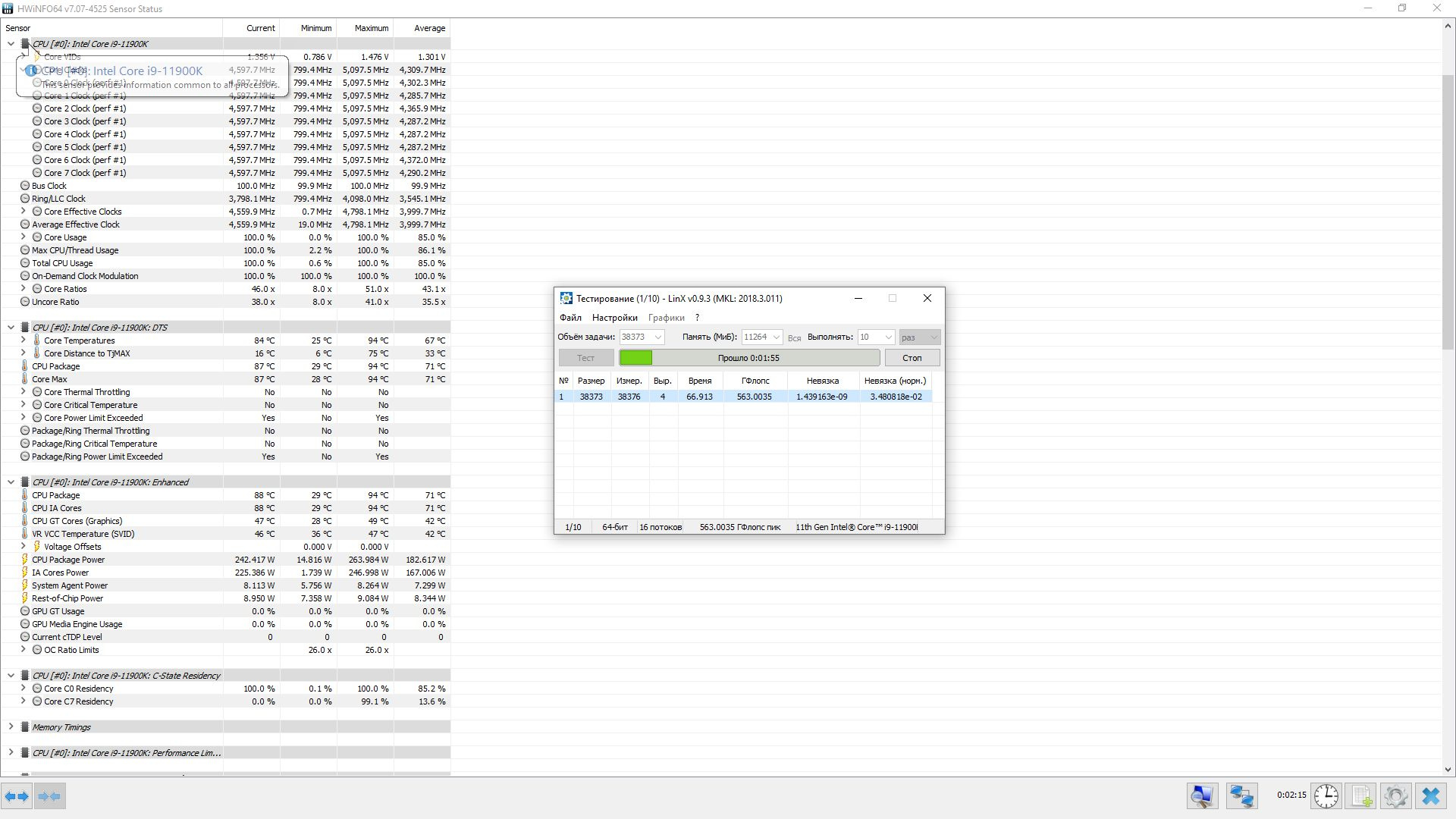 Let me remind you that the result was obtained in tandem with a three-section LSS be quiet! Pure Loop 360 in an open booth, and now it is one of the best off-the-shelf liquid cooling systems on the market. In other words, you run into the temperature limit of the processor much earlier than the capabilities of the motherboard – keep this in mind.

Well, the component base of the motherboard was dismantled, the last thing remained: the BIOS. And ASUS once again does not fail with it.

As always, it is logical, understandable, and contains absolutely everything you need to overclock and fine tune the system. There are CPU and memory presets for the lazy – they work, but keep in mind that no one guarantees stability to you.

Full control over the settings of the processor consumption, its power supply, the modes of operation of the phases, the frequency of their pulsations is given – and, of course, with such a number of phases, LLC works extremely correctly. Plus, we are traditionally pleased with the ability of ASUS motherboards to stably perform automatic recovery in case of incorrect settings. While I was poking around with the memory (and this most often leads the system to a total collapse), I never had to revive the motherboard by resetting to the factory parameters – everything was done by automation. In short, even with all the desire, there is nothing to complain about. 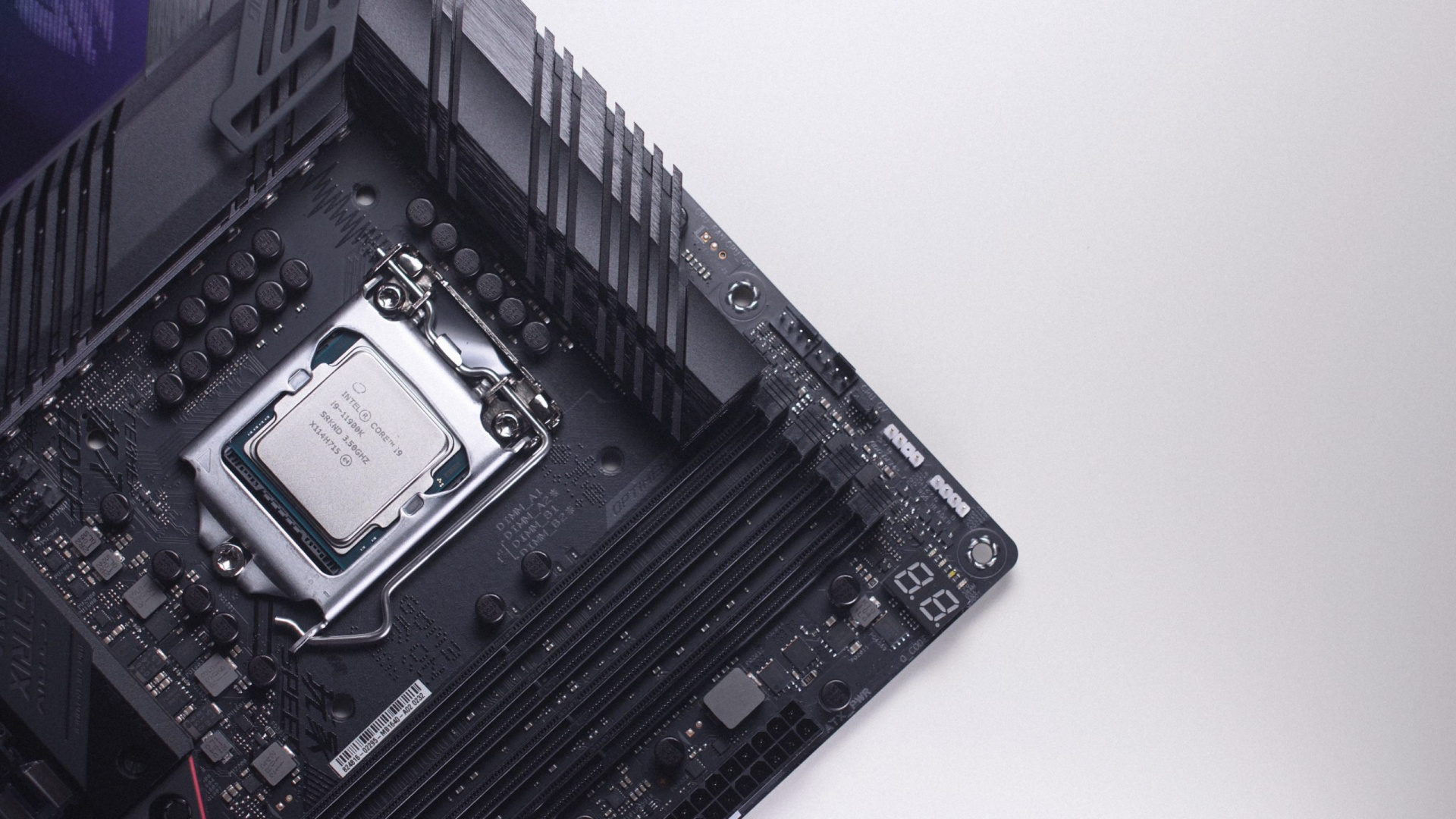 As a conclusion, we can say one thing: ASUS Z590-E Gaming is gorgeous. This is a truly excellent motherboard with a powerful component base, a bunch of bells and whistles, polished BIOS to perfection – and a beautiful one too. I would venture to say that for its capabilities it costs, in general, quite adequate money. Another thing is whether a gamer needs it? Of course not.

For an ordinary user who just wants to build a PC and immediately start playing games, that’s more than enough Z590-F Gaming… Well, E Gaming is rather a tool for a not too extreme overclocker who no longer has fear in his eyes at the sight of 1.6 V voltage on memory modules, but who has not yet grown to a nitrogen glass. In general, this is a board for those who like to tinker with iron, and treats games as benchmarks, and not as a means of entertainment.