We test the Epson EH-TW750 lamp projector and compare it with the EF-11 laser projector.

We continue our series of reviews about projectors. Last week we talked about a relatively inexpensive laser for the market. Epson EF-11… If someone has not read, then in short: this is one of the basic laser projectors, which, with a brightness of only 1000 lumens and half the size of the Xbox Series S, showed no worse than a 1800 lumen lamp and at the same time did not make any noise at all.

Today we are taking the next step: talking about the projector Epson EH-TW750… This is exactly the same 3LCD matrix, but not on a laser, but on a powerful lamp that gives out 3.7 times more light and theoretically you can not close the curtains at all with it and play normally not only in the evenings, but also on sunny days.

Separately, we note that at the time of tests, the EH-TW750 was one of the most affordable projectors with Full HD resolution. Then it could be taken for about 55 thousand rubles, but today the same model is already sold for 65 000. However, if someone is interested in all of the following, you should know that you can still find old models on sale. TW740 and TW650, which technically differ only a little less brightness, but fit into the coveted “fifty dollars”.

The bundle of the TW750 is slightly poorer than that of the EF-11. There is only a projector, a power cable and a control panel – no adapter frames for VESA. However, it is understandable: TW750 is a classic “lamp” in a large white case. Of course, like the EF-11, it can be placed on a shelf, on the side of the sofa, or even on a table in front of you, and for the first six months or a year this will be quite enough. But in the end, you still have to poke holes in the ceiling, buy a holder and hang this TW750 clearly in front of the screen.

The design of the projector is also a pure classic. All the connectors are on the back, and there are plenty of them here. First, there are two HDMIs. Accordingly, you can directly connect to this model immediately and Xbox with PlayStation – well, or PS and some kind of set-top box on Android, in order to organize yourself a full-fledged TV with a media player. Also, there are mandatory D-Sub VGA along with RCA – this is, of course, a tribute to purely presentation uses: say, at school or somewhere in the office. There is also an output for speakers or headphones, as well as USB for, again, flash drives with presentations. Films cannot be slipped through this port. 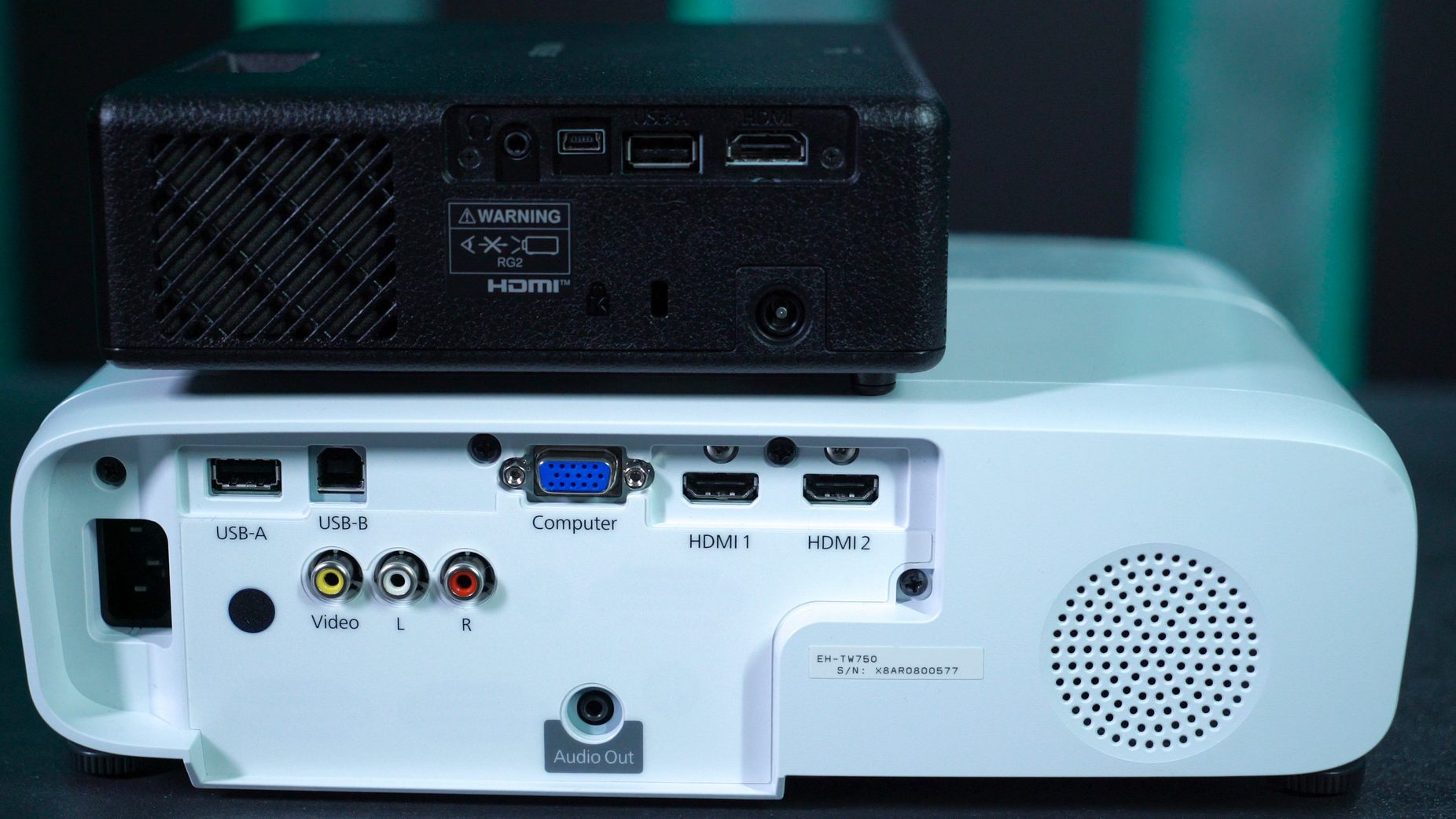 The power supply is built-in, and, for my taste, it is more convenient than external power supply. At the bottom we have three adjustable feet, which will come in handy for the first time, until the projector hangs from the ceiling. Above, respectively, there is a compartment for the lamp – about it a little later – and right there is a dust filter, which should be washed periodically. Also on the top panel all controls are located: arrows for the menu, power, switching sources. However, from experience I can say that you will only use these keys when you lose the control panel.

Right there on top are such things that the EF-11 was sorely lacking. First of all, we are talking about the lens shutter. At home, it is not very necessary in an amicable way, but if the projector is being transported somewhere, then covering the lens is a good idea. Secondly, there is an optical zoom, and this is a very useful feature when adjusting the image to fit the screen. There is also a mechanical trapezoid adjustment knob installed here, but I find it difficult to say how much it is needed, because it is duplicated by menu items.

By the way, it is here the same as in the EF-11, but with slightly more advanced settings for power consumption, shutdown timers, and work with inputs. Otherwise, everything is plus or minus the same: the widest trapezoidal settings, convenient corner adjustments, switching between sources and Mirror Screen parameters, which allow you to connect the projector like a wireless screen to a phone or computer. 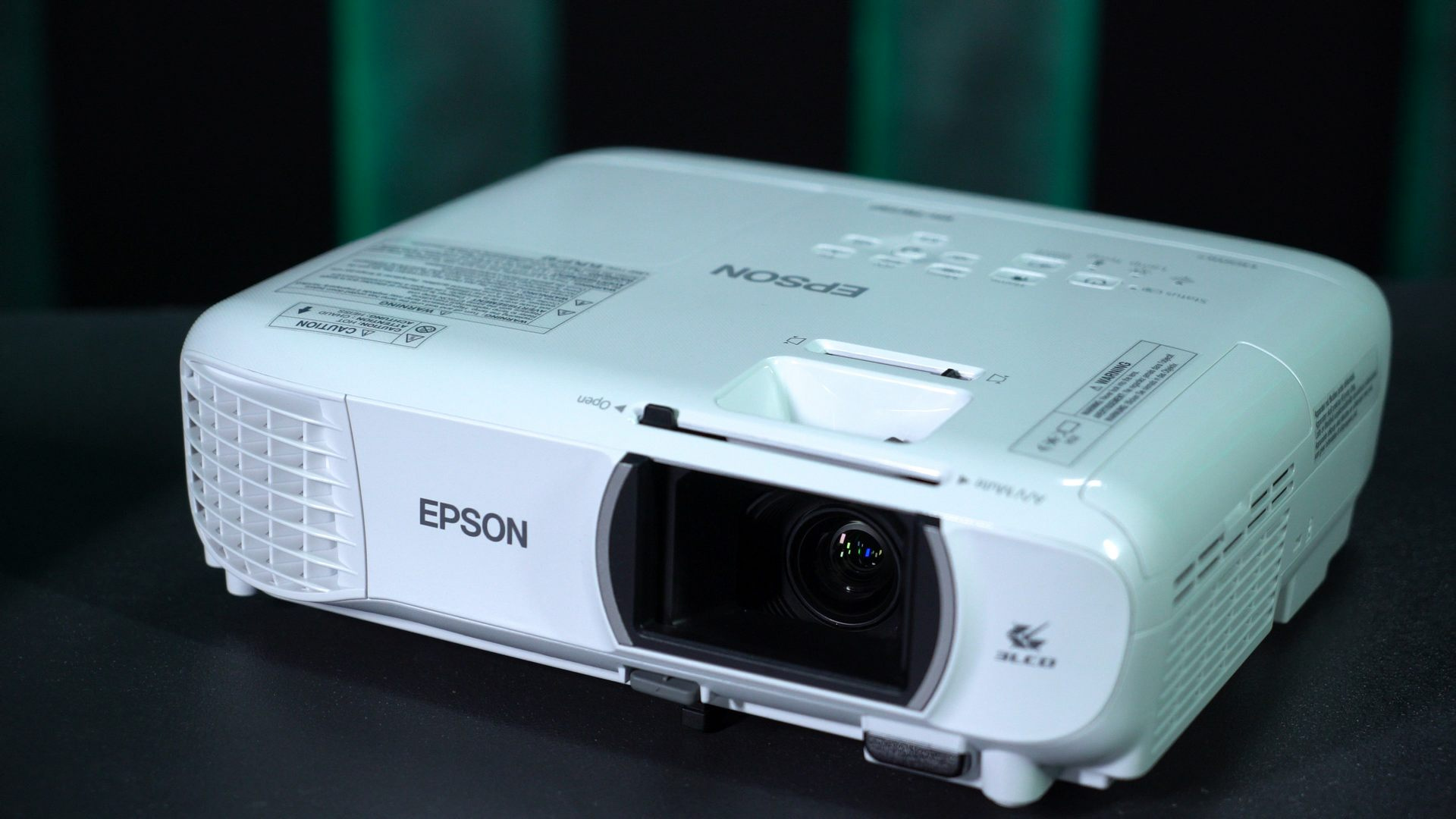 In terms of work technology, this is again EF-11. That is, inside there are the same three matrices on Full HD of exactly the same size, but it is no longer a laser LED that shines on them, but a lamp. And here we will dwell in more detail.

The fact is that a lamp has both advantages and disadvantages in comparison with a laser. And there are a bunch of myths around her. The two most popular ones sound like this: the lamp burns out quickly, and it costs almost as much as half a projector to change it.

As the owner of one of the Epson, I can say that all this with a pitchfork on the water. Yes, the lamps do lose their brightness over time, start to turn yellow and eventually just burst. But it takes years. For example, to burn the lamp, it took me four years of use according to the principle of “TV”, that is, without any savings: I turned it on and he was mumbling and showing something in the background.

The second myth is the cost of replacing a half-projector lamp. This is not true: an assembly with a plastic quick-change module costs 10,000 rubles. Of course, this is a serious amount, and when you have to pay it out at once for updating an expensive projector, it sounds unpleasant. But if you divide it by five years, then it turns out not so scary: 2,000 rubles a year. And this, by the way, still comes out cheaper than the overpayment for the LED from the EF-11. 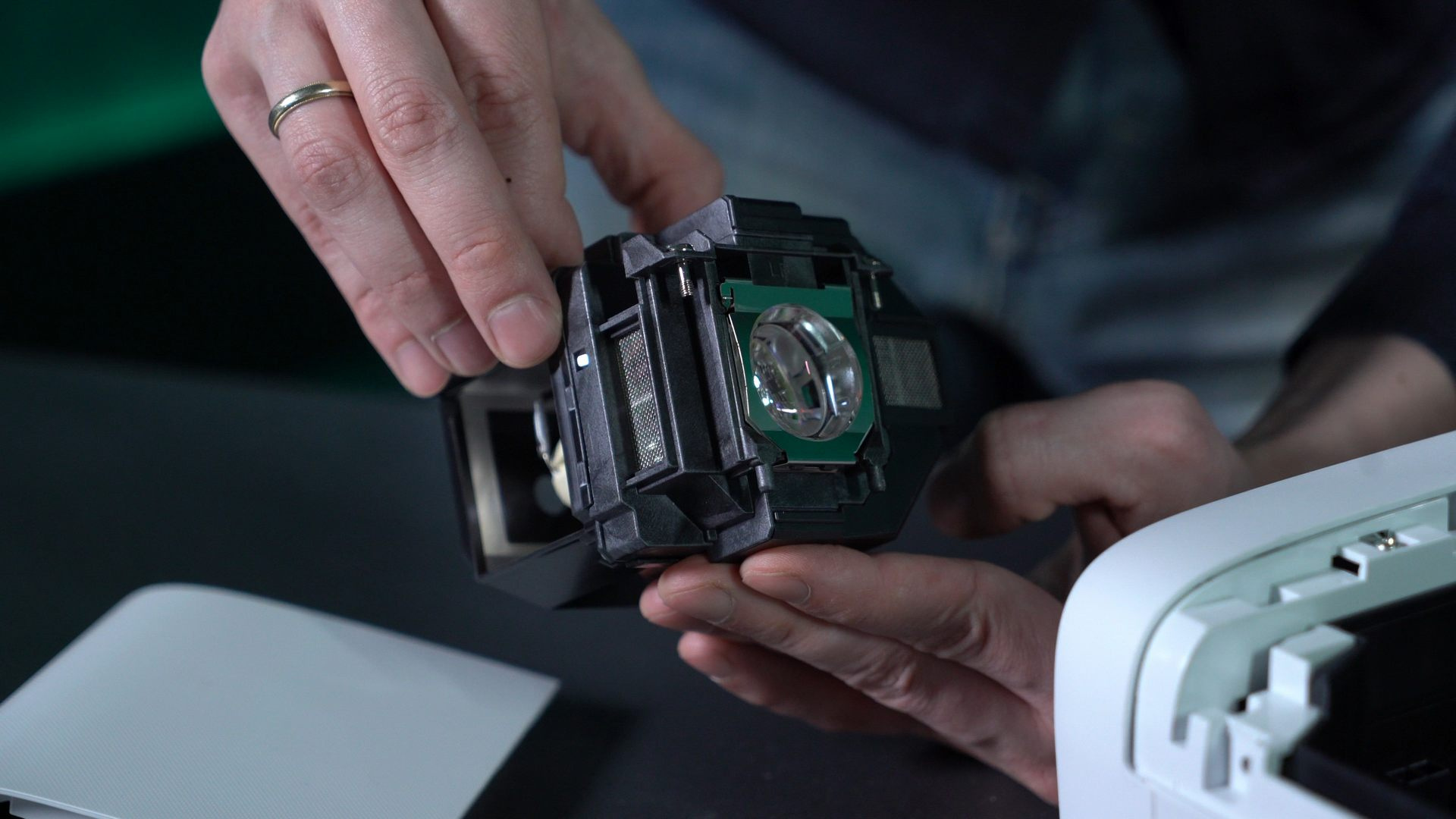 This is about the myths. Now about the disadvantages. In an amicable way, he is alone: ​​the lamp is very hot, and it must be cooled. Three points follow from this at once. First, the EH-TW750 is much larger than the EF-11. Secondly, it is also noisier: if the laser is not heard at all, then the TW750 at full brightness produces as much as 43 dB – about the level of a gaming laptop under full load.

Here, however, I must say that in the evening such brightness is not needed, and, as a rule, in the dark, the projector is reset to the “eco” mode at 2200 lumens and dies down to the normal 32-33 dB. Well, and the third moment – the lamp heats the room. The TW750’s exhaust is about 45 degrees, and in summer it’s hot without an air conditioner.

But at the same time, the lamp has two such powerful advantages that you can easily put up with all of the above. First, a lamp is much cheaper than a laser. Second, it is at the same time many times brighter. If, again, to compare with the EF-11, then the TW750 is 3.7 times brighter, but costs 17% cheaper (at the time of testing) and is much better equipped in terms of ports. Now I’ll tell you what this brightness gives us. 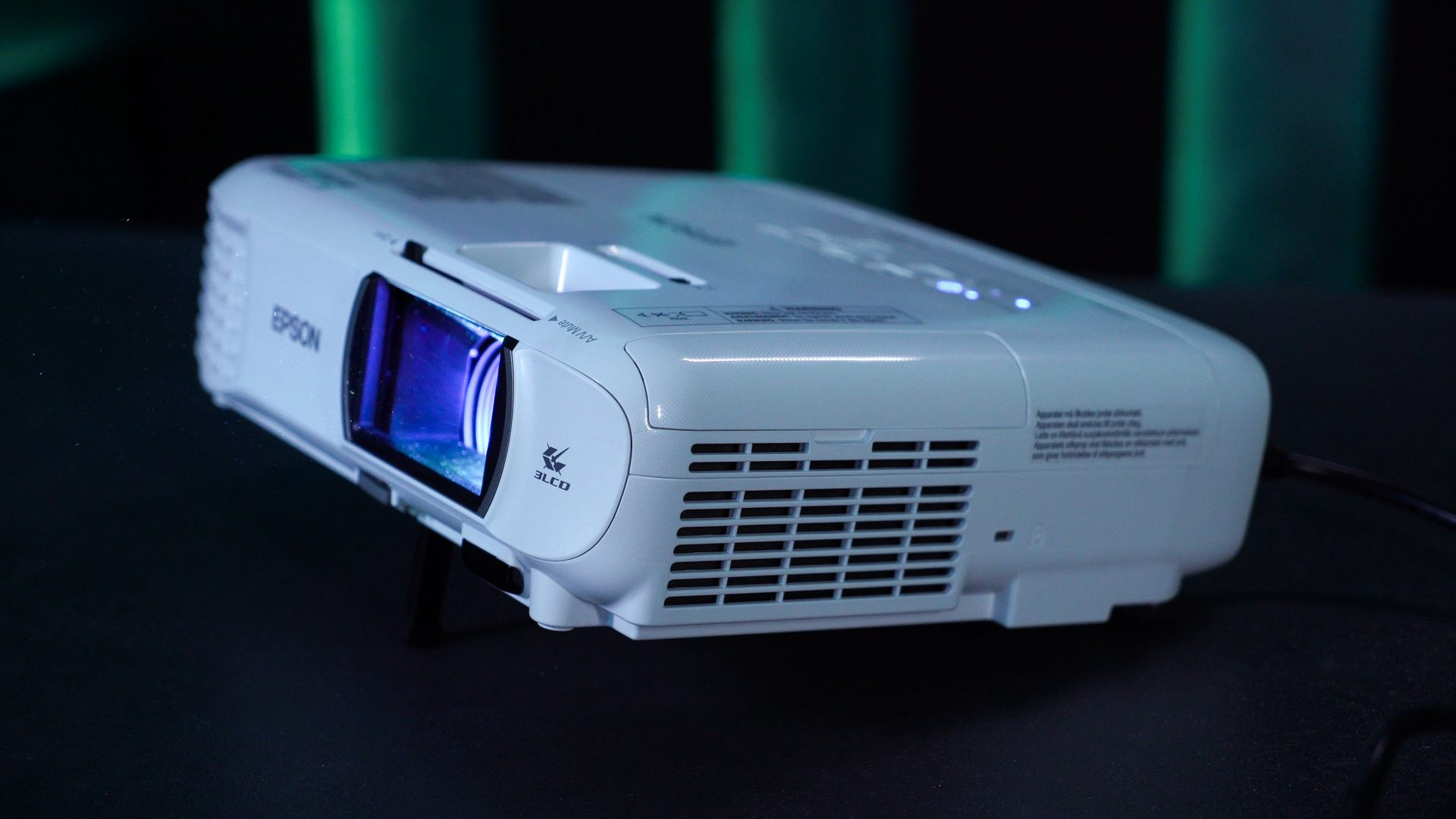 For a start – the most commonplace, but not obvious: bOHigher brightness allows you to turn the screen to aOlarger diagonal. Theoretically, the TW750 can draw a picture of two hundred inches – but, alas, I cannot verify this: there is no suitable wall.

Further, such brightness is just convenient in everyday life. In the maximum mode, even with the sun directly into the windows, you can not draw the curtains and calmly play or watch some kind of TV series – that is, at this point, the projector is as close as possible to the TV. Of course, I will not deceive you here: the contrast during the day is not the same as on a regular TV, simply because it is impossible to achieve pure black during the day – the sun still turns it into a faded gray and it is impossible to play something dark. But the difference with the EF-11 is, of course, impressive.

But when it comes to working in a shaded room, there is a difference with the EF-11, but not so catastrophic. That is, in the evening, the projector must be taken to the eco-mode in any way and the brightness should be reduced so that the eyes do not leak out. And at the level of 2200 lumens, to which the TW750 can drop, the lamp still does not give a huge profit. Yes, such brightness allows you to calmly turn on the light bulb above you, it does not lead to tragedy when the overhead light is turned on, plus it gives a greater effect when there are sharp transitions between dark and light scenes. But again, without HDR support, it doesn’t really affect the final experience.

And finally, about the delay. This is, in fact, another myth that haunts all projectors. Like, playing them is unrealistic, because the input lag is too high. I’ll be careful here and say the following: personally, I admit that for e-sportsmen who buy gaming monitors with minimal lag even for consoles, the projector may seem slow. But personally, I, at the household level, do not observe any delays.

What in Gears of war, what in FIFA, what in Super meat boy I don’t see any difference in speed with my monitors – the difference is only in the color rendition and the amount of detail in the dark zones. Still, both the TW750 and the EF-11 are entry-level projectors, and if you set a goal, you can seriously delve into both dark zones and green shades. But, frankly, in order to get rid of all this, one must look at more expensive models. 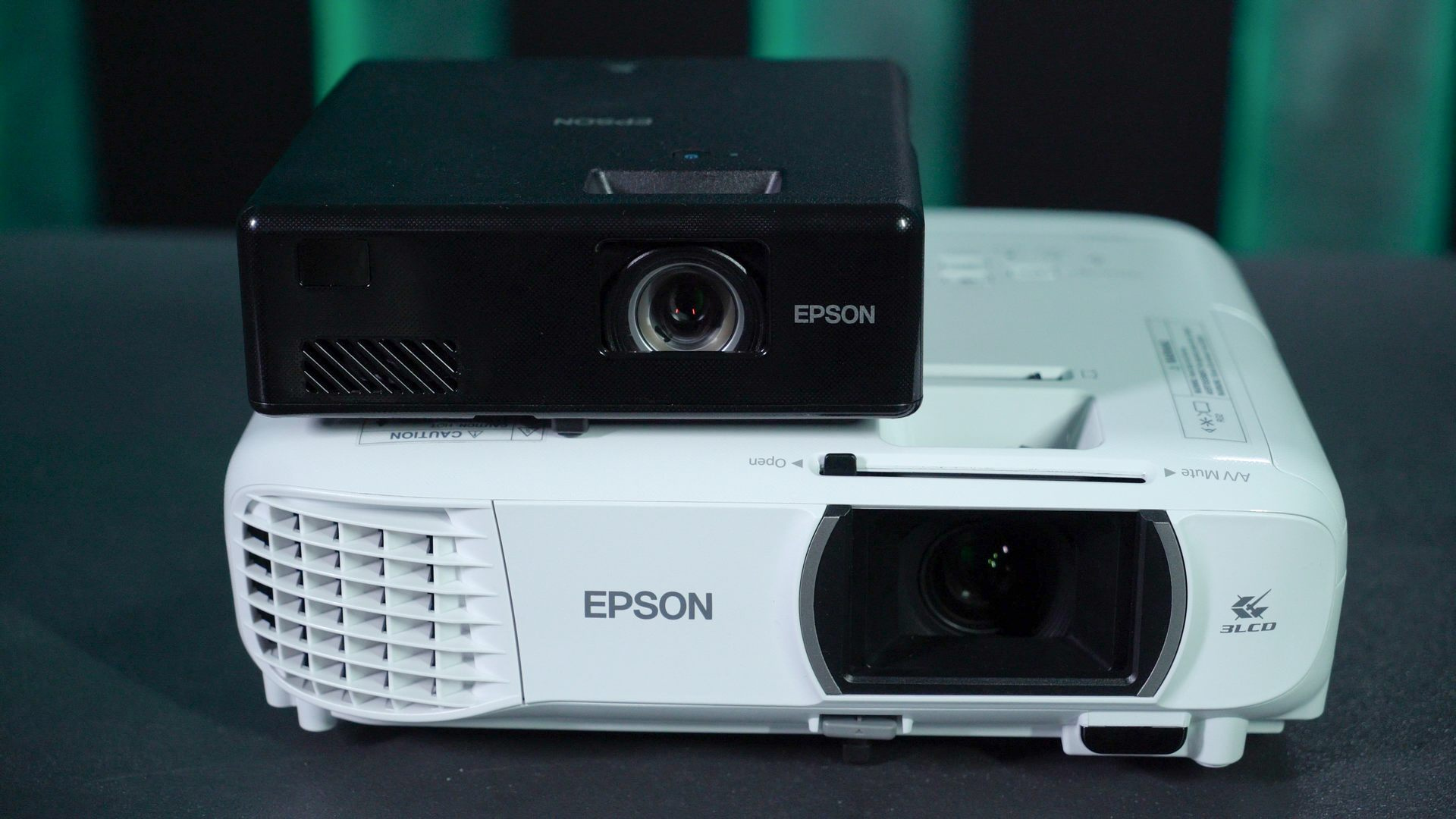 The tested EF-11 and TW750 are those solutions that have practically no drawbacks for their money. What exactly should you choose, a lamp or a laser? For myself, I can say this: in this price range – of course, a lamp. Against this background, the EF-11 is interesting only for its size and complete silence. Otherwise, the lamp is much more versatile: here the set of connectors is richer, and there are more settings, and, of course, the brightness greatly expands the possibilities of use. If the EF-11 gives a frankly faded picture during the day and clearly begs for blackout curtains, then the TW750 quietly works out even with the most common blackout curtains.

Recall that the next one we will have on tests will be one more lamp, but this time on a slightly more budgetary and more “popular” DLP technology.