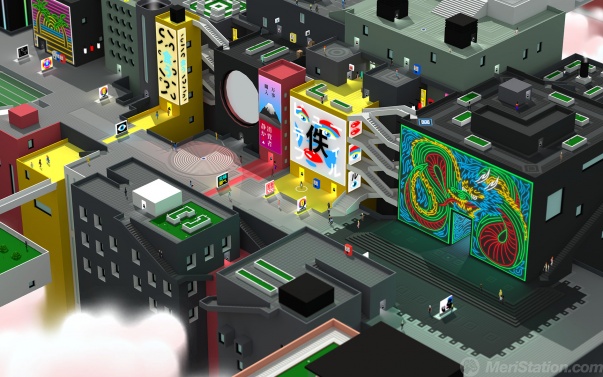 Put in the skin of Deckard from an old-fashioned isometric perspective, our goal is to walk the streets of a colorful and futuristic Tokyo while doing

various missions, which usually entails ending someone’s life. The design of the city is clearly one of the strong points of the game, and not only bec

ause of the impact of the visual aspect; Since we can turn the camera to see the action from the 4 sides, very often we will discover the large number of options and possibilities that exist t

o go from A to B and that had deftly hidden to the unscrupulous eyes of the impatient player . Tokyo 42 has been designed to be explored from all anglesand in that sense the work of the developer is exemplary: we have often experienced that feeling of r

eward for having discovered a secondary path, which in the end has facilitated an encounter with enemies and made us feel smarter than most. And that feeling of reward is tremendously addictive for anyone.

Many of the missions we have to do on our way to clear our name include ending an enemy or a group of enemies; the game gives some c

reativity to fulfill our goal but there is clearly a way that is much better than the rest , and it is usually the stealth route . Armed with a katana, to put a glorious example, we will have to study the patrol patterns of our adversaries, control the field of vision of other minions and establish a plan of action eliminating obstacle a

fter obstacle in the Commandos style.. The AI ​​helps us a lot in that sense, the truth, since it is usually quite condescending with the damag

rtadelo and Filemón , so that we understand each other). In addition, you always have the feeling that direct confrontation is avoidable in 99% of cases and most of the time, frankly speaking, it is better that it be so.

That’s because the combat with weapons , of the available jets, is not anywhere near as satisfying . It is not that the control is different and difficult to get used to (with a remote control it is much simplified), although it costs; is that the game radically raises the difficulty curve when that happens and nothing prepares you for it, leading to many free deaths

that, although without radical penalty, leave a bitter aftertaste. Sometimes the game throws you before a multitude of enemies and a multitude of bullets and, given the peculiar targeting system, you have the feeling that you ar

e always at a disadvantage with respect to the AI. The own design of the maps also plays in our disadvantage; the game is in 3D but the isometric perspective often plays a trick on us, giving the impression that the shots w

e make – and fail – should have hit the target and those of the enemies that should have failed to hit the mark. On one occasion, being behind cove

rage, a shot made an impossible trajectory trigonometrically to reach us (which means dying instantly), and that feeling that the code could be pur

ified is still present throughout the game. These moments of frustration, of complete randomness, are clearly the worst of Tokyo 42 . But unfortunately they are so embedded within the bowels of their development that it seems difficult to be solved.

This is the biggest failure of cohesion that we talked about before: there is a big difference between focusing the title from the point of view

of stealth or from the point of view of combat and the transition that takes place between them. It is the biggest failure, but not the only one. The script, for example, a mere purpose to take us from one encounter to another, could have taken much more advantage because it has hilarious moments that we will not reveal here. A ga

me without an argument is not a problem per se, but having done so would have been worth taking more advantage of. Another problem lies in another of the fundamental mechanics: the movement of projectiles.The projectiles are seen and can be dodged moving, as if it were a vertical shoot ’em up, but so are the enemies. They also do it much better than us

, especially if we are far away when they can hear the shot of our weapon and move away although we have done it behind their backs. That sense of randomness, of being unable to predict the development of events, may be beneficial in some titles but not

in Tokyo 42. The success of the game must lie in the combination of excellent planning and a certain mechanical ability, not in failing a shot with a rocket launcher because the ga

me considers that it has passed over the head when I can not even properly control the accuracy of that shot. Fortunately there are doz

ens of automatic respawn and manual points,The game also offers a multiplayer section in which the frenetism of the game becomes clear. Although it is possible to play with certain doses of stealth, it is very common to engage in a 1v1 fight by a moderately open scenario shooting right and left and placing probes as a decoy to fool our enemies.

If one is able to ignore these inconsistencies, however, the game offers truly spectacular moments of free roaming . We can roam freely killing whoever we want (dying is only temporary in Tokyo 42 thanks to medical advances) and enjoy the city in search of the ton of objects hidden in its mapping or fighting other rival bounty hunters. It would be impres

sive to see what the community would be able to do with a map editor in conditions, because it would be worth as a portfolio to accompany a maste

r in level design.  Its loose missions structure makes it easy to play even if only for a while; nevertheless, notice to navigators, it is never for a while. Whether it’s pride or rage, it’s very possible that the hours go by as easily as we enter an enemy base or do

dge dozens of shots. Or maybe, simply, let’s take a walk through the Japanese cyberpunk capital that SMAC has built for us.

Fresh News
3,500 rubles for this? EA Unpleasantly Surprised with Burnout Paradise Remastered Screenshots for Nintendo Switch
While some companies are trying to release on the popular
0 22

eSports NEWS
Solo: “Professional players love eSports because they can be with people who share their views and goals.”
American player in League of Legends Colin Solo Ernist
0 42

Fresh News
The developers of Streets of Rage 4 announced a combat mode and announced the release date
Dotemu introduced a fresh trailer for bit’
0 49
Notice: Undefined index: integration_type in /var/www/www-root/data/www/freemmorpg.top/wp-content/uploads/.sape/sape.php on line 2008

Almost like in Saints Row: Arsenal of available weapons in Cyberpunk 2077 has been replenished with an unexpected instance
It’s no secret that role playing Cyberpunk 2077
00

Mystery Solved: Players Find a Way to Open a Mysterious Door in Demon’s Souls PlayStation 5 Remake
A few days ago, an interesting secret in the remake
00

Streamers Safe: Cyberpunk 2077 Lets Stream Online Without Worrying About Music Copyright
On a streaming platform Twitch there has been a real
00

PlayStation 5 Upgrade Not Working: Assassin’s Creed Valhalla and Watch Dogs: Legion Buyers Complain
As you know, a number of current releases for the console
00

Three boards for all occasions: ASUS B550 gaming series review – ASUS ROG STRIX B550-E, B550-F and B550-I GAMING
On the computer hardware market for a long time, one
00