Tacoma is a horror game with an unconventional villain. It’s not like there are jump scares, or monsters, or even combat – there’s literally no one on Lunar Transfer Station Tacoma except for you, and you’re arriving well after the events that caused your presence to be required onboard. No, Tacoma’s horrors run deeper and are far more existential, offering you a brief glimpse into a dystopia where corporations have assumed near-total control over our lives. 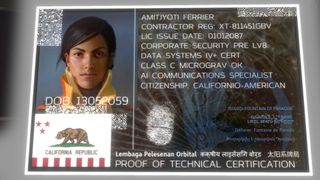 This horror manifests itself quickly in Tacoma’s narrative. You play as Amy Ferrier, an AI communications specialist subcontracting for Venturis Technologies following an accident on the Lunar Transfer Station Tacoma. You are constantly reminded of your employment status, both in emails you receive on your augmented reality hud and messages that pop up on walls as you explore the station. You are required to provide your own ship for the contract. You are to land on Tacoma and retrieve Venturis’ highly advanced AI; you are expressly prohibited from communicating with it. Any other information you may find is the sole property of Venturis Technologies and any deviation from the contract will be punishable to the fullest extent of blah blah blah. All the grandeur of space travel in the year 2088, and you’re awash in bland corporate businesspeak and legalese – but whereas reading your iPhone’s end-user license is a chore, Tacoma smartly uses these endless contracts to cement your role as a cog in this futuristic society.

All Venturis wants is the AI; your contract specifies nothing about the Tacoma’s six crewmembers. So you plug your AI retrieval computer into various terminals, and you… wait. Now, you could just sit there and watch as the progress bar makes its sloth-like crawl toward 100%, but you’ll likely find yourself compelled to head off into the various subsections of the station and explore. You’ll spend time poring over recovered AR recordings of the individuals living on the space station as they deal with the events that lead to their mysterious disappearance, as well as rummaging through their personal belongings, reading their emails, and picking up squeeze-packets of Chup brand ketchup so you can chuck them into a sink (well, I did that, anyway). 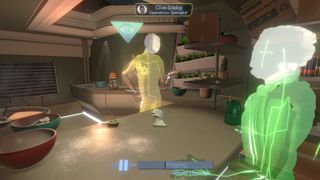 These AR sections are where the bulk of Tacoma’s story lies, and they’re wonderfully novel. When you enter a room where a recording has been made, a push of a button will fill the environment with a handful of human-shaped silhouettes, each one color-coded and labeled by their role on the ship (a small but significant way in which Tacoma shows you how its world sees and values its workers). You can scrub through these ‘videos’ by rewinding and fast-forwarding through them – and you’ll need to if you want to catch every little detail. Each of Tacoma’s inhabitants move through the space, coming together into groups, breaking off into pairs, or going into rooms by themselves. In order to keep track of everything, you’ll often have to start the recording over and follow someone else around each section just to see how the entire scene fits together. It’s pretty brilliant, adding three-dimensional layers of interactivity and space to what would otherwise be simple audio or video logs.

You’ll also use them to solve a handful of keypad ‘puzzles’, though calling them puzzles assumes that you’ll have to put much more thought into them than watching the recording input a code then entering it in yourself. It’s nice that they’re light and often optional so that your progression doesn’t grind to a halt, but their inclusion often feels arbitrary; seeing a keypad somewhere means you’re probably going to find a sticky note with a four-digit pin on it nearby. Rather than feeling clever, its puzzles only serve to remind you that you’re playing a video game. 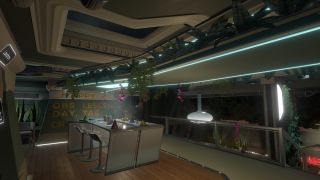 By watching these recordings, you’ll get the basic gist of how things played out – but you’ll miss a lot of the little details if you don’t rifle through people’s belongings or glance at their emails. It’s in these clues where you’ll learn about each of the crewmembers’ backstories, gain glimpses into their personal lives, and find out how they interact with one another during times of stress or boredom. You’ll discover how relationships on the station blossom, or learn of their struggles dealing with leaving their family back home on Earth for the year. The writing, as it did in Fullbright’s poignant debut Gone Home, injects a genuine sense of humanity into a setting where you’re the only human around for miles.

It’s also in these notes where you’ll discover just how many ways late capitalism has wriggled its tendrils into the hidden corners of our everyday lives. The elegantly designed lines of Tacoma’s corridors belie a very bleak idea of what the future holds: privacy is all but abolished, company Loyalty (with a capital L) is literal currency, and unions have to fight to keep people valued in a society on the cusp of complete automation. In a reality where Amazon is slowly able to offer services for virtually every human need while exploiting its own workforce, and where the self-driving car is about to put millions out of work, Tacoma’s vision of the future is less science-fiction and more like the next logical step for where all of this is going to end up. It’s easily the most successful thing Tacoma does, offering a harrowing glimpse of the mundanity of corporate dystopia. 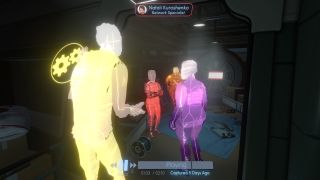 Less successful are its thoughts on artificial intelligence. It’s not that the pieces aren’t there, it’s that they seem to take backseat to its thoughts on the role labor plays in a futuristic society – which is a bit disappointing when the whole reason you’re even on the station is because you’re there to pick up an AI. It feels like Tacoma began its life intending to tell one kind of story then morphed into another, which leads to a sense that it’s biting off more than it can chew in the brief five-or-so hours that it lasts. It’s also hard to tell whether that’s a failing on the game’s part for not including that information in a note tucked away somewhere, or if it’s my own failing for not finding it – as such, certain reveals in its closing moments hit me much harder than others.

But even with its narrative stumbles, there’s no denying the tangible sense of place Fullbright has crafted in its haunting realization of a near-future society. Even as technology grows more powerful, new nations split and form, and our reach into the stars extends, Tacoma offers a cautionary tale of how little things can really change – and that’s perhaps the biggest horror of all.

This game was reviewed on PC.