Did you know that 2011 was six years ago? It was quite a year for gaming. Big games such as Skyrim and Portal 2 came out and made it onto many people’s game of the year lists. It’s also when Duke Nukem Forever finally released after more than a decade of troubled development and became a thing that people could finally buy with money.

It was also when Fortnite was first announced at the 2011 Spike Video Game Awards, taking inspiration from the recent indie hit Minecraft mixed in with the fresh-at-the-time zombie survival genre. It is now six years later and much like the world, Fortnite has gone through many changes and is now a free-to-play game in paid early access. 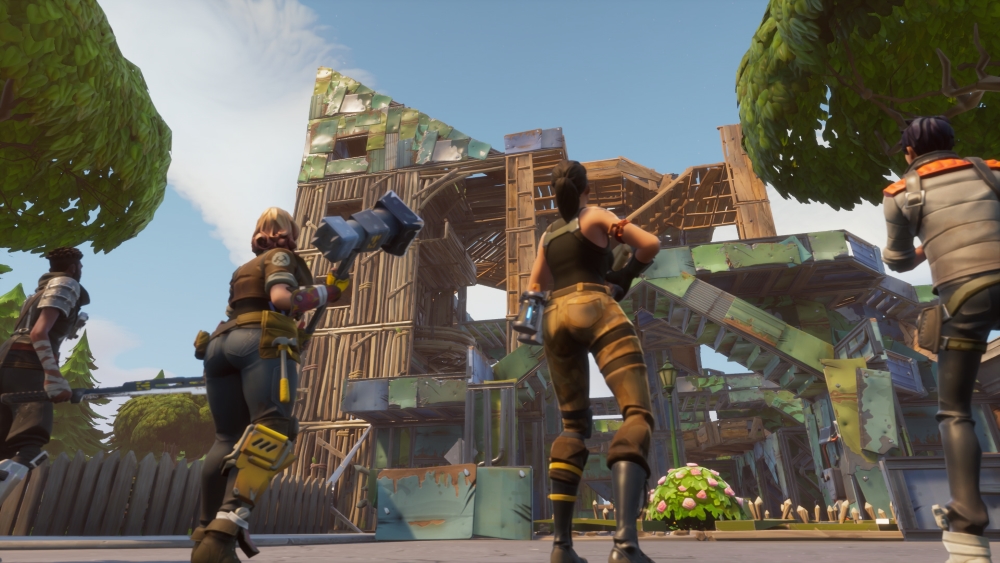 In the world of Fortnite, strange storms have swept the land and have turned humans into monsters referred to as Husks. The last remnants of humanity have banded together to survive and try to find out what’s going on with the purple-themed apocalypse. Players take on the role as “The Commander,” who will lead the fight against the Husks and manage the survival of the human race.

Fortnite, at its core, is a game about gathering and making stuff to fight the enemy. Up to four players can team up and go into an sandbox open-world map with an objective that can either be protecting something or finding a certain amount of something while gathering loot and resources along the way. It is a co-op centric game that highly encourages players to work together, greatly benefiting everyone.

The combat itself is pretty good, as you would expect from developers who’ve worked on the Gears of War series. There’s a great assortment of guns and melee weapons to play around with, and abilities that just make you feel powerful but still provide a good challenge when facing the Husks. Throw in the wave defense and base building and you’ve got a great experience going.

The other main part of the game is crafting, which comes into making the stuff important to the gameplay: weapons, traps, and structure pieces. These craftable items have durability, with weapons wearing out from use and structures (and the traps attached to them) from damage. This means that they have to be crafted again after they break.

Making stuff requires resources and gathering resources involves using an indestructible pickaxe to break down stuff made of the resources needed: wooden things and trees give off wood, while rocks and brick walls provide stone, etc. The three types of primary materials for building structures (in ascending order of strength) are: wood, stone, and metal. There are also other minor materials needed for other craftable items such as traps and weapons. Managing and utilizing the right resources for item creation adds another layer of challenge such as when you’re in the middle of an attack and gathering isn’t a viable option. 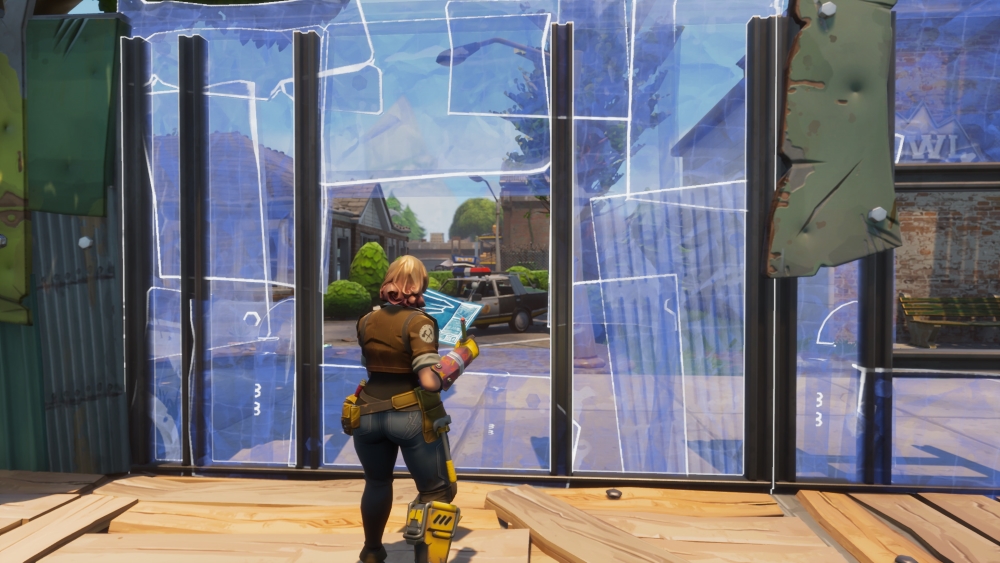 Designing the structures and trap placement to hold off against the different types of Husks is one of the best parts of Fortnite. The grid-like design allows for some creative designing to effectively use traps and structure pieces for defense. One has to consider what kind of enemies will attack as well as taking the terrain into consideration. I like to build structures for efficiency and practicality while providing an adequate defense, then there are other people who like to place platforms wherever they feel like that accidentally creates a super convenient bridge to welcome the enemy right into our base (which happened to me last night).

Fortnite is online-only with a narrative that is designed in a way that can be played while in a multiplayer space, where most of the maps can be used to fit the current story point from the view of the player. This allows people at slightly different points of a story to play together, provided they’re in the same game type. Players will just see things a bit differently from others depending on where they are in the story, which determines the objectives and story voice-over narration.

This modular map style allows a healthy population in different game type locations so players will almost never have to go alone. What this also does is make a lot of the missions feel the same but with a different part of the story slapped onto it. Add in the all the repetitive grinding, and a lot of the places will just start to blend together. 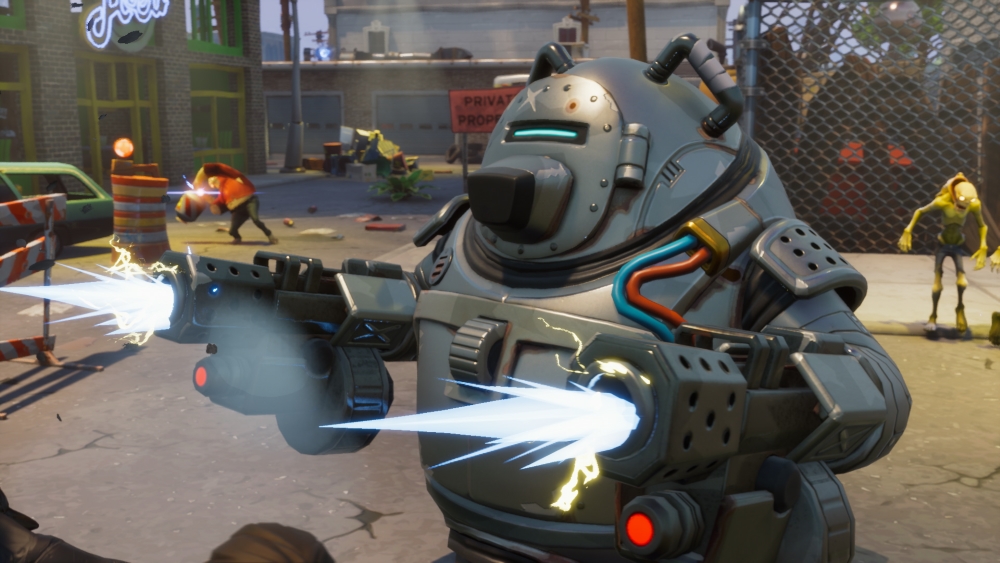 Fortnite goes for a lighter tone with a humorous side to match the bright and colorful almost Pixar-like art design. This was refreshing at the time of announcement back in 2011, when everyone was getting tired of all the brown and grey looking super serious games. The writing can be funny but the jokes can feel a bit forced at times. The voice acting is pretty good in the story parts, but it can get tiring hearing all of the same repeated lines during gameplay.

The player or “The Commander” takes control of heroes, which are the four different classes in Fortnite: the usual well-rounded shooter class with the Soldier, the swift and highly maneuverable Ninja, the building-focused Constructor, and the resource gatherer Outlander. Each class will have advantages that can contribute to a team in different ways and there are subclasses for more variety that provide even more perks and bonuses.

As with any free-to-play game, there is all kinds loot and other stuff to earn for use in the game. I was able to get the $60 Deluxe pack for this review which had plenty of loot to get me started (this is the same as the physical copy available in stores right now). Fortnite was still regularly generous with loot, even without all the special paid goodies with the price of admission. I was surprised at the rate of which I got stuff from normally completing missions, which will likely favor those planning to not spend a single cent when this game comes out next year.

The pacing and progression through Fortnite is a bit slow, though. Much like other free-to-play titles, there is that point where you have to grind more to get stronger to defeat the increasingly tough enemies in order to progress. My brother has logged many more hours than me but all that grinding for better loot still has him running into troublesome enemies and he’s not that much further into the story. 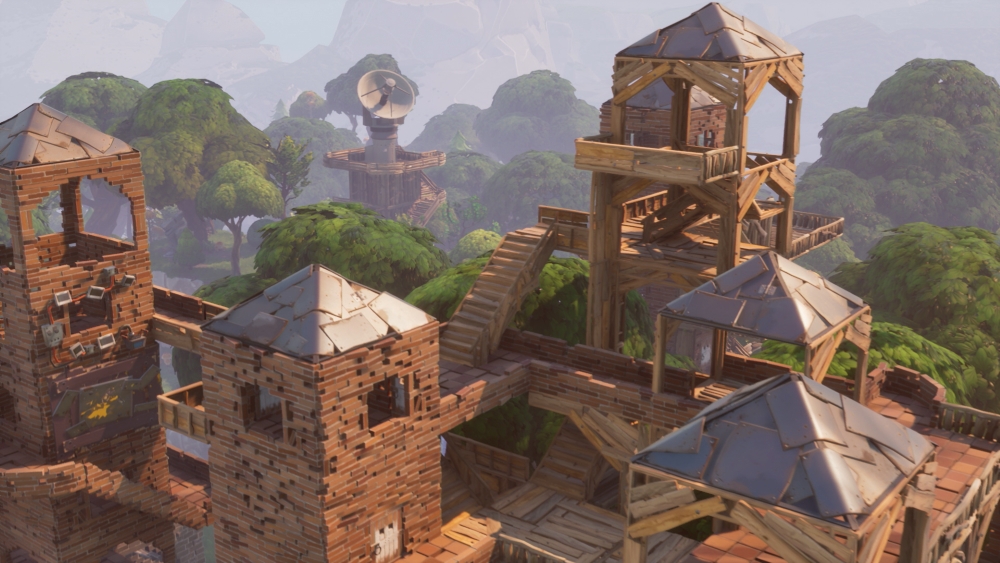 There is a base management aspect in Fortnite, which involves a lot of organizing (human) resources and even sending out heroes to expeditions to gather materials and loot. Heroes, defenders, and survivors can be assigned to different roles and groups to add bonuses that increase player stats. Players can use experience points to level up and improve their specific equipment or people which gives even more stat boosts. One these items are the schematics, which are the blueprints that allow crafting of consumable items such as weapons and traps.

There’s always something that can be done in Fortnite, and plenty of ways to hook you in and coming back for more in typical free-to-play fashion. Quests are plentiful and trying to burn through all of them will take a lot of hours, resulting in fat loot to make those numbers go higher.

A skill tree-like system called “Research” (not to be confused with the game’s actual Skill tree) let’s players spend points to unlock boosts. Research points accumulate in real time even when not in the game, and these points have to be used since there is a cap on how many can be stored away before use. This is another one of the many devious methods in the game to get players to log in regularly (which totally worked on me). 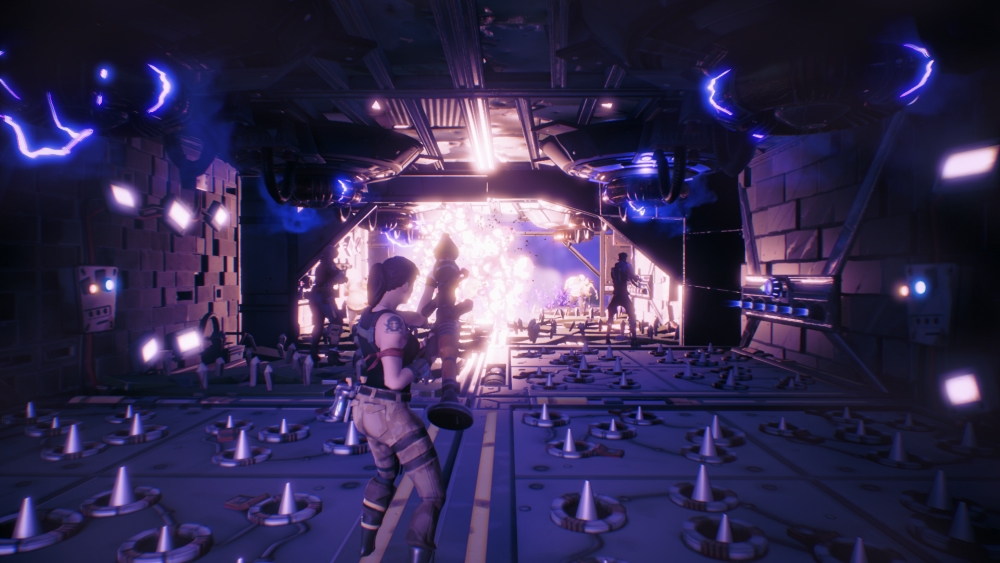 As with any game in active development, it is expected that there will be bugs popping up from time to time. I’ve encountered a few crashes and things not working right but it’s playable around 95 percent of the time. Keeping track of all the loot is sometimes hard with organization and navigation in the many menus. There is also a bit of a lag in the menus, which is a slight annoyance that will likely get fixed in the future.

A recent change caught many players off guard when maps got tweaked by the developers, requiring a wipe of their persistent home base forts. This upset many players since it set back people’s progress. Fortnite is almost done and all kinds of changes are still a possibility between now and the free-to-play release next year.

Fortnite has solid action that helps with its repetitive nature and there are enough hooks to keep players’ attention as they come back for more. I really can’t shake the feeling that some parts were reworked into a free-to-play game since it was announced in 2014 that it would become one.

Those who don’t want to pay to try something that’s almost finished and/or planned as an eventual free-to-play game might want to wait for the final product in 2018. Those who are curious enough and willing to pay the price of admission now might want to bring a trusted buddy along for the ride since it’s one of those repetitive games that’s instantly better with familiar company.

[This review is based on an early access build of of the game purchased by the reviewer.]