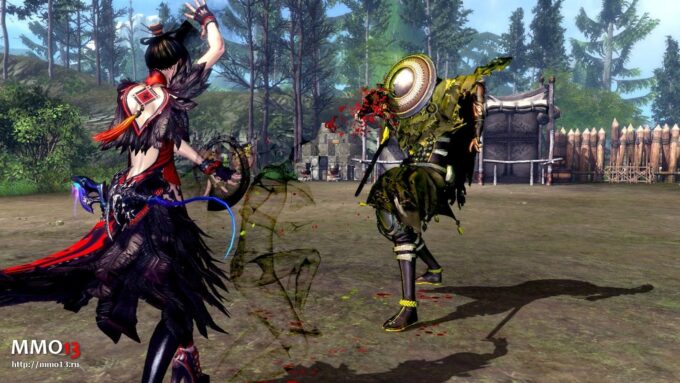 The first thing that attracted the attention of players in Blade and Soul after the demonstration of the promo clip in 2008 is the quality of graphics. And today anyone can personally verify how seriously the NCSOFT company has worked on the game. And this test will show: the promo clip did not deceive, the game is really amazingly beautiful. The engine of Unreal Engine 3, on which B & S is made, may not be considered the most advanced among video games, but as a basis for MMO it allows to realize everything that is necessary.

According to the style, Blade & Soul resembles a manga, where half-naked girls are pointedly sexy, and men are either effeminate, or similar to a mountain of muscle. There is nothing surprising in this. Art director of the project was the famous in Korea manhwa artist Hyung Tae Kim. However, relatively realistic characters also come across.

At present, four humanoid races are represented in the B & S: graceful Kun girls, muscular giants of Ghosn, nyushki with big ears and tails of Lee and the closest to the ordinary people of Jin. After choosing a race, you will have to choose one of the nine classes: blade master, kung fu master, destroyer, master of power, killer, summoner, sword master, warlock or master qi.

The class defines not only the mechanics of combat, but also the interface. For example, some classes use mana and others use units of morale. In Blade and Soul, they abandon the “trinity” (tank, healer, dd) and virtually every character can deal damage and skillfully survive using the strengths of the class. This decision, of course, affected the group game.

Each class has a unique gameplay. Killers are shadow fighters who try to strike back, destroyers are characterized by slow but powerful attacks, magicians masterfully master control spells and area attacks, swordsmen cleverly parries blows, responding with sharp and frequent attacks, fist fighters are distinguished by quick actions both in defense, And in the attack.

The game has a unique and specific style of combat. In combat, an auto-target targeting system is used – the target that is in front of the character is automatically allocated. For maximum efficiency, the learned skills must be combined in a combo. And although the dynamics are lower in comparison with the games in the classic fighting game genre, for ordinary MMORPG battles are extremely vigorous.

The development of the character takes place in a traditional way for the genre: we gain experience, increase levels and learn new skills. Each hero has several basic skills and many secondary, which somehow change the basic. Blade and Soul encourages experiments with the build: the redistribution of skill points can be done at any time for a very affordable price.

Armor and clothing in this game perform only a decorative role, and the character’s parameters can be changed with the help of weapons and accessories, the most valuable of which is the amulet of Bo-Pae. It can insert eight magic fragments, each of which enhances the characteristics. If you collect shards of the same kind, then you get a set bonus, which in other games is given for the sets of armor. With the help of reagents it is possible to improve the fragments.

Quests for the moment are not very original and interesting, they can be easily performed without reading the text, but simply running around the indexes. However, in Blade and Soul one of the most impressive storylines (by the standards of MMORPG), capable of giving odds to most singles. Separately it is worth noting a huge number of clips on the engine.

It can not be said that Blade and Soul stands out for its phenomenal uniqueness, but it is certainly a qualitative, beautiful and interesting MMORPG from the genre coryphaeus, deserving to try the Russian version from Innova.